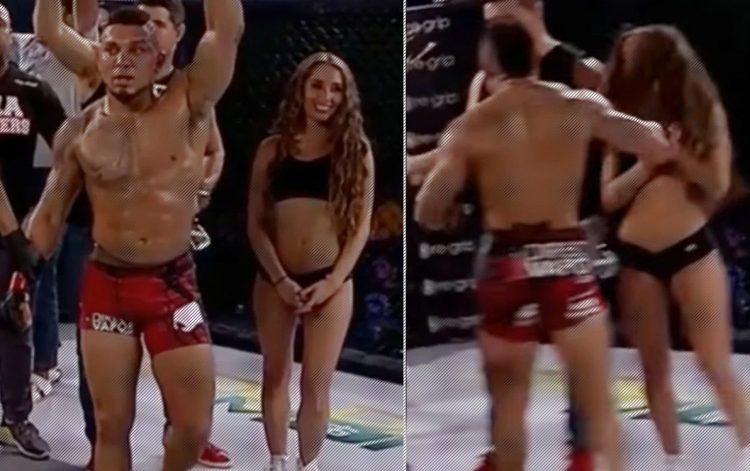 The shocking moment, MMA fighter Andrew Whitney punched a ring girl in the face after losing a fight has been caught on camera. Andrew Whitney, known as ‘The Beast’ was frustrated after judges had ruled he lost his against Farkhad Sharipov at the Titan Fight Championship 42 this week.

The footage shows him with his hands aloft and seemingly ready to claim victory. But the decision goes against him, the brawler reacts by swinging what appears to be a random punch. The ring girl was right in the firing line and ended up being hit on the chin.However, there is nothing to indicate that The Beast did it on purpose, and he can be seen trying to catch her after realizing what happened. The poor ring girl standing next to him feels the full force as the blow lands on the chin.

Despite the force of it, she manages to stay on her feet!

CEO of Titan FC Jeff Aronson, said: “In the immediate aftermath of losing a very close title fight at Titan FC 42 Andrew Whitney threw a punch out of frustration which unintentionally hit one of our ring card girls.
“Our ring card girl was attended to by the ringside doctor and officials. She indicated she was fine and was more surprised by the punch than injured.
“Titan FC is broadcast around the world and we expect our athletes to conduct themselves in a professional manner at all times.

“We have spoken with Andrew Whitney and his management and are taking appropriate actions to make sure this unforeseen incident is not repeated.”

Andrew Whitney ‘The Beast’, 32, had won four fights in a row before losing to Sharipov on a unanimous points decision.