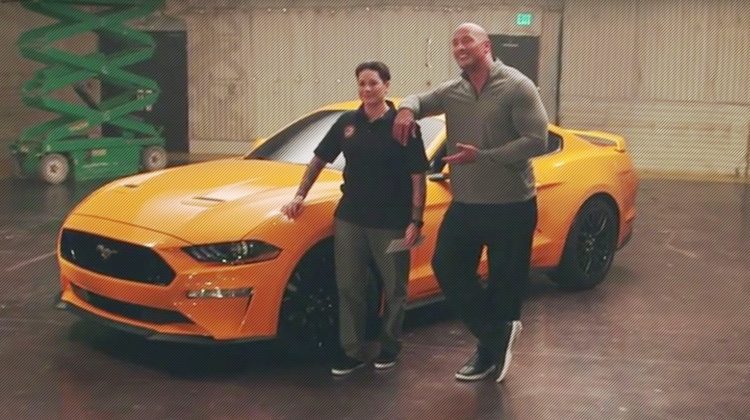 Dwayne The Rock Johnson is an Ambassador at Ford, and recently he decided to partake in giving away the Ford ‘Go Further’ award. The winner, Marlene is a combat veteran who put in three tours and has a Purple Heart to show for it. She also is a huge fan of The Rock and was not expecting to meet him. Before Dwayne Johnson appeared and lifted Marlene’s spirit, she was giving a heartfelt answer to how she felt about how her combat tours.

“I heard I wasn’t the only one with the badass tattoos” was the first thing he said when he saw Marlene.

Johnson awarded Marlene with tickets to his new upcoming Baywatch film, which she thought was going to be her only gift, then The Rock hit her with a brand new 2018 Ford Mustang. At that point she was in complete shock and said, “Why?” and “I don’t deserve all of this.” The People’s Champ responded with, “You deserve more.”

The Rock seems to be in an uplifting spirit because last week he gave some hope to DC fans when he was at the DC headquarters.

It looks like we may be inching closer to seeing Johnson hit the screen as Black Adam. He wrote, “As a hardcore DC fan, to get a real sense of the tonal shifts and developments coming in these future movies has me fired up.”

How to Build Your Upper Chest Without Flys Or Presses