How to Build Your Upper Chest Without Flys Or Presses 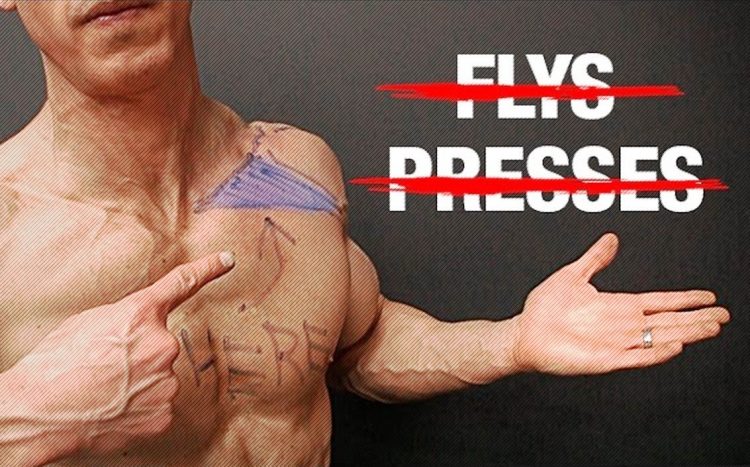 If you want to build your Upper Chest and traditional chest exercises like incline bench press and incline flys are too uncomfortable because of a shoulder injury, then the following video is going to be greatly helpful. In fact, even if you aren’t injured, the upper chest exercise shown here will be a great addition to your chest workouts to help you start packing some mass onto the upper portion of your pecs in quick order.

To start, it helps to understand the anatomy of the upper fibers of the pectoralis major. The pec has both a sternal portion and a clavicular portion (as well as a much smaller costal region). The fibers of the upper chest are separately innervated and run at an oblique angle from the clavicle down to the biciptal groove of the upper arm bone or humerus.

That said, if you look just to the side you will also see the front delts. These neighbors of the pecs are more than just a different muscle. They are in close proximity because they share many of the same functions of the pecs. If you understand this, you can see that by stealing from some of the exercise options used to train the delts you can come up with chest exerise alternatives that are much more tolerated than traditional movements like the fly or incline bench press when injured.

The fly, done unsupported, has never been a top exercise choice for me. Not only is the risk to reward ratio low considering the athletic population that I train but even for the non athlete, removing some of the risk by performing the floor fly variation is a much better option. Not to mention, this version allows me to overload the eccentric and get much more out of the movement. That said, the anterior shoulder capsule gets put in a very vulnerable position at the bottom of the fly that is particularly aggravating to someone who has a shoulder injury already.

On the other hand, the incline bench press is phenomenal chest building exercise but one that becomes really difficult to perform if your shoulder is hurting. This is because the elevation component of the movement can lead to an aggravation of an existing shoulder impingement or rotator cuff tendonitis or strain.

If you perform the upper chest crossover shown in this video however, you can train the fibers of the upper chest without the potentially harmful components of the previously named exercises and not have to abandon your chest training all together. To perform this movement, simply grab a dumbbell and stand with it at your side. Bring it up as if you are going to perform a front delt dumbbell raise but instead of tracking in line with your shoulder, bring it across your chest at the same time.

This line of pull will engage the upper chest much more and turn this into an incredible exerise for your upper pecs. Though you may be using lower weight than you would in a traditional incline bench press you will likely be placing a much higher load on the chest muscle itself which is all that matters when it comes to building a bigger muscle.

Contract the muscle hard at the top and lower slow. Continue until failure on both sides to develop an evenly built upper chest. This may be one of the only exercises you can do depending on the severity of your shoulder injury at this time. That is ok. Keep your volume up without having to abandon your chest workouts all together and you not only will keep your chest strong but you will be able to bounce back from your injury much sooner.

The human body consists of about 600 muscles. These are divided into three main categories — skeletal, smooth, and cardiac....

Whatever your fitness goal is, reaching it will probably be an expensive endeavor. There is a steep cost to building...