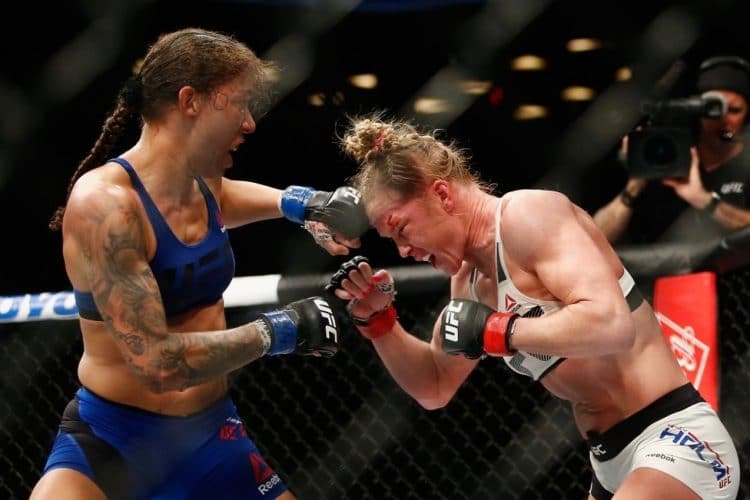 It was a night of triumph for Germaine de Randamie in New York, as UFC President Dana White placed the first UFC women’s featherweight belt around the European fighter’s waist after her defeat of Holly Holm. Yet the contest was mired in controversy.

Though de Randamie outclassed her opponent, Holly Holm, for much of the bout, but it was marred by some late fight antics. De Randamie threw late punches after the horn in two rounds but didn’t lose points from the judges for her actions.

Instead, she went on to win by unanimous decision — 48-47 on all three cards.
Holm came on strong late in the fight, controlling de Randamie up against the cage for most of the fourth and fifth rounds. She landed a solid right to her chin that seemed to knock de Randamie off her feet, but because Holm was in the clinch, she was unable to capitalize on it.

The point deduction would have rendered the three judges’ scores to 47 apiece, given that de Randamie won by unanimous decision victory 48-47 on all three cards.
4

Judges Sal D’Amato and Jeff Mullen scored the first three rounds to de Randamie, as your correspondent did, and the championship rounds to Holm, who was more successful in the clinch, grinding out the last ten minutes and hurting de Randamie with a heavy left hand, as the Dutchwoman clearly began to tire. Third judge Chris Lee gave the second round to Holm, the fourth to de Randamie.

But it was de Randamie’s power in the striking which was most telling. “It was a close fight. She caught me in the third round,” said the new champion afterward.

“It was a good kick, but you won’t knock me out that way, and I kept coming. She didn’t want to fight me but I am a warrior, and I came here to fight. It was an accident to hit her after the bell, it was never intentional. It was just the heat of the moment. I am not that kind of fighter.”

“Holly is a tremendous champion and I truly respect her but I am a brawler and I love to fight. I want to fight everybody and I will fight anybody so we will see who is next. I want to thank my team and the fans in Brooklyn, who have been amazing to me. Thank you very much.”

Sitting Octagonside was Cris Cyborg, currently serving a suspension for a positive doping test. De Randamie, who is now on a three-fight win streak, knows she will likely face Cris Cyborg, the woman who was supposed to be in this main event, next; however, de Randamie said she will need to undergo surgery for a torn ligament in her hand before that happens.

Elsewhere on the card, Silva scored one of the strangest recent decision wins over Derek Brunson. Not only did Silva win by decision, the judges made it a unanimous one.
The venue was sold out and set a new gate record for the Barclays Center of $2.3 million.