Incredible Tale Of The Transformation Of Shirley Webb 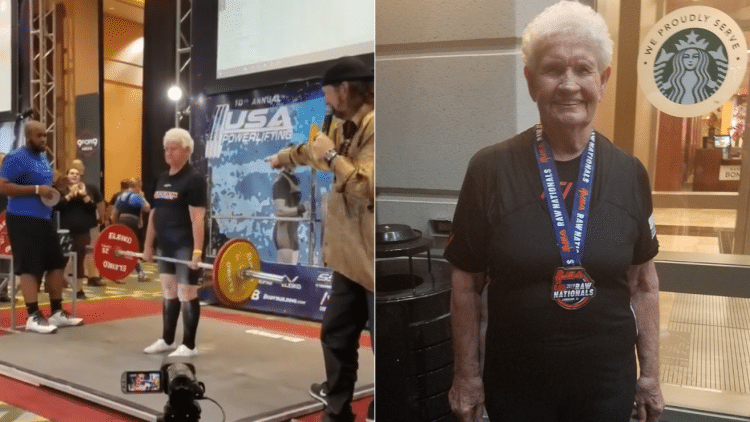 Shirley Webb did not start powerlifting until she was 77 years old. Nevertheless, five years later, she has transformed into being an incredibly powerful woman.

Webb was born in Kentucky, in 1937. She spent the majority of her life never going to the gym, or lifting weights. As a result, when she was asked by her granddaughter to go to the gym, she was at first a bit skeptical. After all, at this point in her life, she was unable to pick herself up off the floor, and struggled climbing stairs.

Nevertheless, Webb reluctantly agreed, and began going to the gym. Additionally she began working with a personal trainer, to help guide her in the right direction. In an interview, she explained how much of a difference this began to make from the get-go.

“After about three weeks, my trainer had me getting up off the floor by myself, and now I can walk up the stairs without pulling myself up. I always hold the handrail for safety reasons at my age, but I can walk up them without holding on.”

Shirley Webb took to lifting fairly easily, having a particular knack for the deadlift. Additionally she began to really enjoy the progress she was seeing, as well as the feeling she got from working out. Subsequently she began going on a regular basis, and getting a lot better.

Then she decided she wanted to give powerlifting a try.

Despite the fact that she did not start until she was 77, Webb was able to give a start to her career as a powerlifter. She was really starting to gain some popularity, even having a viral video featured on ESPN. Then when she took to the 2015 USAPL MO State/Midwest Open, she was able to gain quite the buzz. She won that competition, beginning her run in championships.

However things were not always easy for Shirley Webb. In her second run at the IPF World Championships in 2018, she began to experience some issues with dizziness. Seeing a doctor, she was diagnosed with positional vertigo, causing her to get dizzy when moving her head.

Despite this diagnosis, she did not let this stop her. Webb kept training, and was able to overcome this issue. While it really affected her bench press, she was still able to crush the deadlift. As a result, she was able to capture second place at the 2019 Raw Nationals, in the Masters 5 division.

These are her personal best lifts:

Every step of the way, Shirley Webb has defied all expectations. Overall, she holds 18 medals, from both national and world competitions For someone to start so late, face adversity, and still perform as well as she has, is an inspiration to all of us.

Best Squat Secrets Every Athlete Should Use to Improve Lifts

The Life And Legacy Of Larry Scott