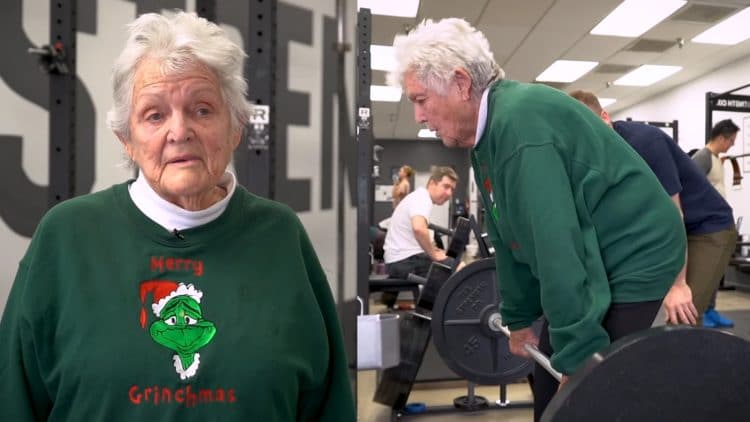 More often than not, new beginnings and exploring unchartered territories come with the fear of the unknown. When it comes to starting a new business, learning a new skill, or even starting a workout, we often tend to wonder if it is too late for us to do that. However, that is not the case with Barbara Rawlings a.k.a. Corki. At 86 years of age, Rawlings recently celebrated the completion of her first full year of weight training. In a recent interview with Starting Strength YouTube channel, Barbara Rawlings spoke about her journey over the last year.

A shining example of the popular catchphrase ‘anything is possible, Barbara Rawlings trains at the Strength.Co gym. The owner of the gym Grant Broggi is Rawlings’ family friend. When Broggi learned about her fall at home, he advised her to visit the gym where she could develop strength and lead a healthier life. Broggi wanted to help Barbara cope with the decline and loss of function due to age-related problems. For one full year now, Rawlings does weight training at the gym three days a week.

In a recent interview with Starting Strength, Corki admitted that it was mentally challenging for her to start training at her age. Nevertheless, she accepted the challenge and started hitting the gym at 8:30 AM on Monday, Tuesday, and Wednesday.

“When I first came in here, I was definitely intimidated. It wasn’t scary, it was just a challenge. I had never done anything like this before. The only exercise I ever did was walking. But I’ve loved it, every minute of it,” Barbara Rawlings said.

As would be the case with most, Barbara Rawlings’ one-year journey is a result of slow and steady progress. Gym owner Grant Broggi explained that initially, they focused solely on perfecting movements with very light weights. Over time, Corki went on to add weights and learn complex movements. Broggi also added that Barbara Rawlings is a part of a group class. The gym is not only a place where she trains but also a place where she comes to socialize and make new friends.

“We’ve kind of built up over time. When she came in she would just do one movement, very light, you know, just getting her moving. And then, you know, she’s been adding over time, deadlifting over a hundred pounds now. I mean, she crushes it. She’s in a group class just like everybody else. She’s got a bunch of friends in here, she comes here to socialize,” Grant Broggi said.

Barbara Rawlings seconded her coach’s thoughts and shared the wisdom she has gained over the last year.

“I love this gym because when you walk in, everybody says hello. They give you encouragement and you know you can do this because they’re rooting for you. I would definitely recommend weightlifting to anybody my age. Younger, older, anybody but particularly the older people. It gives you confidence, it gives you strength for you to do your daily chores. It’s a very positive thing,” Barbara Rawlings said.