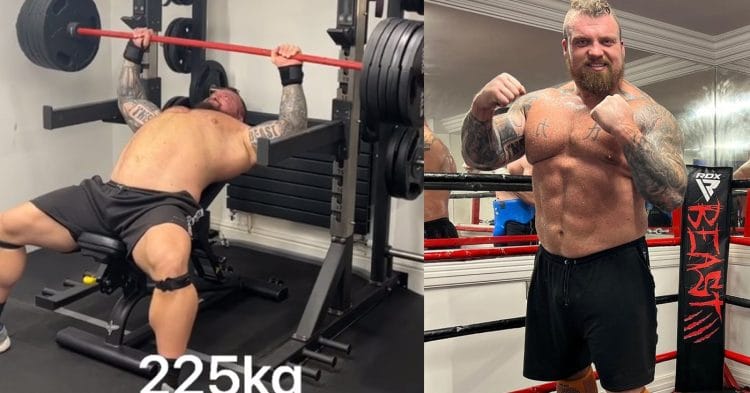 Taking into consideration his training for the boxing match against Hafthor Björnsson, Eddie Hall has lost a lot of weight, and it would be expected that he has lost a lot of strength. However, 2017 World’s Strongest Man showed that he has not lost much upper body strength in his latest Instagram post. In the video, we can see Eddie do some heavy incline bench presses.

In the video, Eddie attempts 5 repetitions with 195 kg (429.9 lbs), but does 4 successful repetitions, as he failed the fifth rep. Furthermore, Eddie manages to successfully do a huge 225 kg (496 lbs) incline bench press. He only used wrist wraps to help him in the lift.

Eddie also points out that he will never neglect strength training and that he never felt better.

“195 kg & 225 kg bench as part of my S&C session today. I’m a big believer in staying as strong as possible as long as my cardio doesn’t get affected and I’ve never felt so fit in all my life. Running, swimming and boxing daily with 3 strength and conditioning sessions a week. Sitting at 157.5kg bodyweight 💪” wrote Hall.

The hatred between Hall and Bjornsson has been building for years, and it’s just getting worse. It all started on the strongman field, with Thor feeling and vocalizing that Eddie had cheated him out of a win at the World’s Strongest Man, but it only became worse after the Icelandic champion snatched Eddie’s world record deadlift.

Eddie Hall got mad because of the way the record was broken. That is because Hafthor broke the record in his home gym, the record attempt was still regulated by the strongman officials. Immediately after breaking his record, Hafthor challenged Eddie to a boxing match.

The boxing bout was supposed to happen but got postponed when Hall accidentally detached his left biceps during a sparring session. After the injury, Eddie had to undergo surgery and had to take some time to recover. However, while Eddie was recovering, Hafthor fought against an arm wrestler, Devon Larratt, and won with a first-round TKO. After that Eddie and Hafthor started negotiating a new contract and added a $100.000 wager which didn’t last long, as they kept increasing it. The fight is now scheduled to happen in the month of March 2022, and the wager is now that the loser has to get a tattoo of the winner.

Related: Strongman Eddie Hall Invites An ‘Average Joe’ To Try His Boxing Workout And Diet For a Day

It is great to see that Eddie Hall did not lose too much of his strength while transitioning from strongman to boxing. He does a lot of cardio and has lost 38 kg (83.8 lbs), as he now weighs 157.5 kg (347.2 lbs). Eddie was always recognized for his strength and explosive power, and it will be fun to see how he incorporates that into his boxing technique.