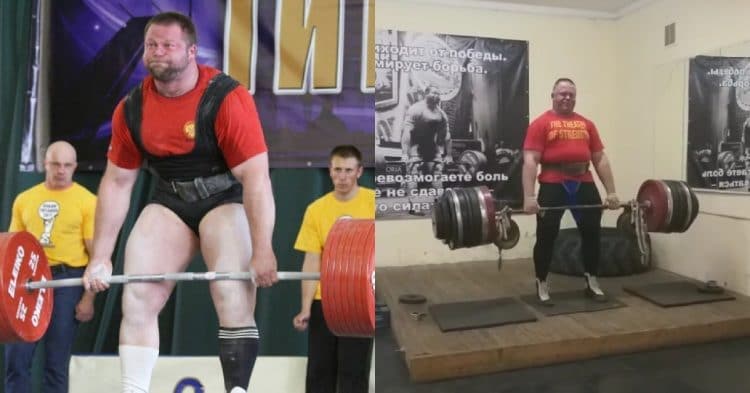 Alexander Klyushev is a Russian strongman turned powerlifter, who has been competing for nearly two decades. However he had one of his best showings ever, when he did a massive deadlift in the gym recently.

Klyushev was initially introduced to strength sports with powerlifting, discovering the sport at a young age. From there he would dabble in strongman competition, even earning a qualification for the World’s Strongest Man. However he would ultimately realize his passion truly lied in powerlifting, where he would compete for 15 years, winning several championships.

Although Alexander Klyushev has not competed in four years, he is still in the gym constantly. Even though the world is largely in a state of shutdown right now, he is still training hard, as he showed in a recent Instagram post. The video shows the 36 year old blasting through an enormous 370kg (815.7lb) deadlift. The lift was so massive that it caused the plates to pop off when he set the barbell down again.

Now obviously, 370kg is not the most impressive deadlift of all time, or even the most impressive we will see this month. Chances are, if Alexander were in a proper setting, with a normal supply of plates, he would have had no issues. Nevertheless, he explains in the post that he had to rig together this barbell, plus you can see additional weight tied in to the bar, so when considering that, it really is an impressive feat.

It is good to see that Klyushev still has some really solid ability. Here is a throwback video of him in one of his vintage performances from 2006. It was him becoming the first person in Russia to deadlift 400kg.

All in all, Alexander Klyushev is a true veteran of strength sports, particularly powerlifting. It is good to see that even though he has not competed in nearly four years, he still has not lost much ability in that time away.

The Best Six-Pack Abs Workout You Can Do At Home