Hafthor Bjornsson: Eddie Hall ‘Doesn’t Want Me To Take His Legacy Away’ With 501kg Deadlift (EXCLUSIVE) 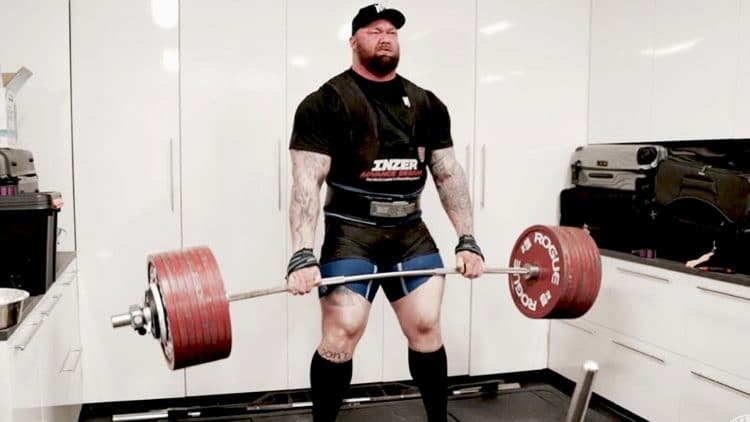 Hafthor Bjornsson has been hearing the criticisms of his world record deadlift attempt. In an exclusive interview with FitnessVolt, he has decided to respond to some of those criticisms, as well as preview his attempt at the world record.

Bjornsson was originally expected to go for the 501kg deadlift attempt at the World’s Ultimate Strongman event. However, when that was canceled, he decided to switch things up and attempt the lift at his house, in an event live-streamed by ESPN. While some people are excited to see him attempt this insane records, others have pushed back on the idea that this will count as an official record, with it not being in competition.

Speaking exclusively with FitnessVolt, Hafthor Bjornsson explained that he is not concerned about the critics. In fact, even with all the things going on in the world, he has kept his focus on making this goal a reality.

Listen to the interview below…

“My training has been on fire, to be honest with you,” Bjornsson said. “Everything has just been feeling great. I’ve been obviously focusing a lot on the deadlift. Two days ago I just pulled 470kg like a warm-up, and I’m just super excited. I’m very thankful for the support I’ve been receiving from all around the world. It seems that people are really excited to see this.”

Of course, if Hafthor Bjornsson plans on hitting a new world record, his diet is just as important as his weight training. He explained that while he does not count his calories, he does put a lot of thought behind what goes into his body.

“I don’t really count my calories,” Hafthor explained. “I’m eating six meals a day. There’s a lot of steak, a lot of rice, some carrots, peppers, spinach, some fruits you know. I just really try to stay consistent with my diet. I don’t really count the calories but the diet is on point.

“In the morning I have six eggs with rice. I might have bacon, I usually have rice but I actually had bacon yesterday just to spice it up a little bit. The next few meals are steak and rice, with peppers and carrots and spinach. Right before my session I have my Reign Body Fuel, so I can get my caffeine PCH inside my body, train hard and then I eat again. It’s all about staying consistent, and I’ve been consistent now for ten years.”

Thor recognizes that training is quite difficult, during this global health crisis. Even though he has a facility he could go to, he has decided to train in his garage anyway, to show support to those who are not so fortunate. He explained that just because you are home, does not mean you can’t get a good workout.

“Honestly, you just have to stay positive. The reason I’ve been training in my garage is to show people that you don’t have to have all the fancy equipment to train to get strong, or stay in shape. I’m mostly using bars right now to stay in shape

. I’ve also been using bands more, to show people even the strongest man in the world can use a bar and some bands, and be in the best shape of his life. So I’m saying that you don’t have to have the big gyms with fancy equipment. You don’t always need that.“

Bjornsson then goes on to explain that Reign’s YouTube channel is full of videos with great tutorials on workouts people can do without equipment.

As for this world record attempt, Hafthor Bjornsson will be trying to deadlift 501kg on May 2nd, which would the heaviest of all time. But in talking to him, he actually is more interested in championships than records.

“(Getting the record) would be the world to me. To be honest with you, I’ve always been more for titles. Titles stay forever. Nobody is going to take away from me being World’s Strongest Man in 2018, but records will always be broken at some point. On May 2nd, when I pull 501, there is going to be a day where someone breaks that. But no one is going to win my 2018 World’s Strongest Man, nobody is going to win my titles at the Arnold Strongman Classic from 2018, 2019, and 2020. Those titles will always be mine. That’s why I always go for the titles instead of the records.

“But it looks like people are very interested in the records now,” Bjornsson continued. “People want to see big lifts, especially with deadlifting. So for the people staying at home, in quarantine, I want to do something cool for them. I already had plans on pulling 501 at World’s Ultimate Strongman. When COVID-19 came and everything went on lockdown, I decided, with World’s Ultimate Strongman, I would do it at home, by myself so I could entertain people, and make them look forward to something.”

One of the ways in which Thor is trying to make this lift a bit more valid is by having trusted referee Magnus Ver Magnusson officiate the lift. He feels this makes all the difference, in terms of validating his record. Besides, he says it would not make sense for him to try to cheat anyway.

“I have the world’s best referee,” Thor explained. “If you ask the other strongman athletes, they will all agree that Magnus Ver Magnusson is an extremely strict referee, but also a very good one. He won’t give you anything. He will only say that it’s a good lift if it is a good lift.

“People were saying ‘it’s in his gym, it doesn’t count,’ some people have gone as far as to say they don’t trust Icelandics, some people have said I’m going to try to cheat the weights. Why would I do that? Why would I risk my reputation to do something stupid like that? There’s no need. I’ll never do it. That’s why we’re going to weigh the plates. It’s going to be live on ESPN, we are going to weigh every single plate, and show it live.”

Despite these efforts, people are still critical of Hafthor Bjornsson. Nevertheless, he feels he is ultimately doing something good for the sport.

“People have been breaking records by themselves for a long time. Now it looks like people are getting a little sensitive that I’m going to break this in my gym,” he continued. “To me, I would perform the same in competition. Maybe even better because when you have 10,000 people cheering your name and supporting you, it gives you the adrenaline rush that you need. I’m actually quite worried doing it in my gym almost by myself. I’ll have a referee, I’ll have a doctor there, I’ll have a few cameras in my face, but that’s it. I would love to be able to do it in an event, but I can’t control the COVID-19.

“Right now I’m in this shape, and the people who know a lot about strength they should know that it’s very hard to peak for something like this. I was already training for World’s Ultimate Strongman, and with that being postponed I had to make some adjustments. I honestly thought I was doing something great for the sport, and I still think I’m doing something great for the sport. All this media attention, all this attention, people are talking about this so much. It’s just going to grow the sport. People are saying it’s going in the wrong direction, I honestly think it’s going in the right direction, because having it live streamed on ESPN is huge. I think this is the future, live streaming strongman events.”

One of the people who have been the most vocal about Thor’s world record attempt is Eddie Hall, the man who currently holds that record. The fellow strongman has gone on record, saying he will not count this as a true record. However, he will still be doing live commentary for the attempt, despite his criticisms.

“I have no comments on that, really,” he said. “He is allowed to have his own opinions. Honestly, I think that he knows I’m going to pull 501. This is his legacy. In his strongman career, he won World’s Strongest Man once, he did this 500kg deadlift, and that’s his legacy. He doesn’t want me to take his legacy away, and that’s why he’s getting so offended by this.

“He can have his own opinion, that’s fine. He knows that I’m stronger than him, he knows I’m better. He just doesn’t want me to take his record, that’s all.”

Hafthor Bjornsson will be attempting his world record deadlift on May 2nd. You can watch the action live on ESPN, and stay tuned to FitnessVolt for more coverage of the lift.

Antoine Vaillant Looks Ultra Bricked Up, Even In Quarantine