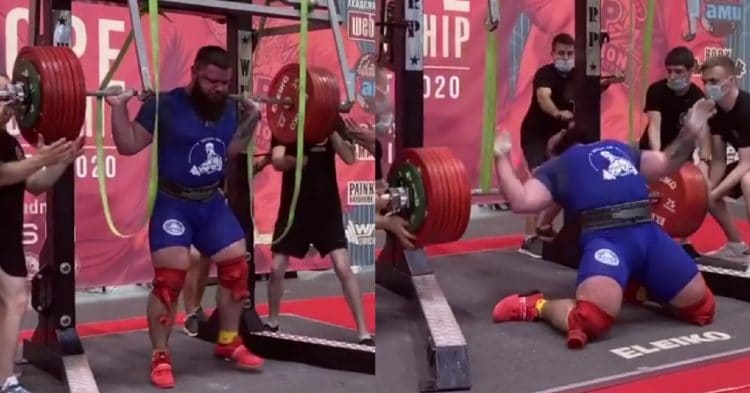 When done properly, pushing yourself to the absolute limit can be an exhilarating experience. However as Russian powerlifter Alexander Sedykh discovered, sometimes this can backfire in a big way.

When 30 year old Sedykh took to the WRPF European Championships last week, he did so with big aspirations. Things were going well at first too, as he was successful on his first two squat attempts. After taking to the platform for a 360kg and 380kg squat, he decided to really push himself for the third attempt.

Unfortunately Alexander Sedykh pushed himself too far when he tried to squat 400kg. A video posted to the WRPF Instagram page shows the horrendous moment that his knees collapsed under the weight, breaking both of them. This would lead him to need six hours of surgery, resulting in him essentially needing to relearn to walk. However the post also showed that he is doing okay after surgery, albeit still likely in a ton of pain.

Swipe to see the video below, but be warned it is pretty gnarly.

“Dear friends!
…
Yesterday, at the European Open, a disaster struck our sports family. Our sportsman Alexander Sedykh was seriously injured. The athlete conquered 380 kg, but, unfortunately, on the next approach to 400 kg … (video in the carousel)
…
From the venue of the tournament, Sasha was taken by ambulance to the hospital, where he was urgently operated on for 6 hours.
…
The athlete himself does not lose heart! And already, moving away from anesthesia, he gave comments regarding the previous operation:
“Everything hurts, but we’re holding on 💪🏼
The forecasts are as follows: lie down for two months, do not move your legs! Then he learns to walk again, and to recover. This is according to the doctor.
The knee was assembled well, the doctor said, the quadras were sewn with a double stitch. I don’t know anything else yet! The doctor tried to talk to me in the morning, but I was apparently not adequate. Therefore, I really do not know anything. It seems like another wife writes that the meniscus broke and the tendons flew off. She talked to the doctor. Well, in general, they sewed everything. ”
…
A lot of athletes ask a question about how to help Alexander, and we also considered it the right decision to share the details of his wife with you. Any, even the most minimal financial assistance in this situation will greatly help a speedy recovery! We will definitely keep you updated on the condition of the athlete🙏🏻
be healthy and take care of yourself!”

The first signs of trouble came as Alexander walked the weight off of the rack. He was struggling to steady himself before he even began the lift. Nevertheless he tried to do the squat anyway, but wound up on the ground, screaming in agony.

Obviously this is a horrific nightmare for any competitive powerlifter. Luckily the surgery went well, but Sedykh is still doomed to lie in bed for two months, before having to relearn to walk. There is a very real possibility that this is the end of his powerlifting career.

It is good to see that Alexander Sedykh is maintaing a rather positive mindset during this difficult time. Hopefully he can heal up, and one day get back to weight training.