Andrey Sapozhonkov Whips Out 262.5kg Bench Press Double Like Nothing 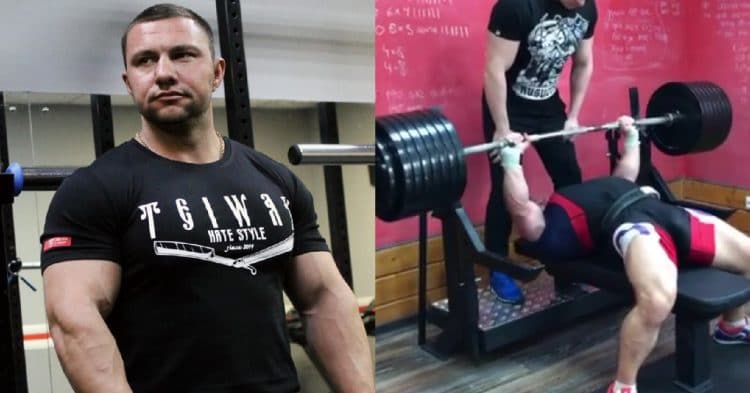 As a decade long veteran of powerlifting, you would think Andrey Sapozhonkov would be done blowing people’s minds. However he showed recently that he still has plenty in the tank, and can still deliver some solid performances.

Hailing from Russia, Andrey has had the type of career that many aspire to have. Although he is not as well know in the United States, his efforts in Russia and Europe have set him apart as one of the best 90kg powerlifters in the world. This skill has led him to countless victories over his ten-year-long career, including several WRPF World Championship victories, breaking records along the way. As such, there can be no denying how skilled and elite of an athlete he is.

That being said, if you forgot how good Andrey Sapozhonkov is, he decides to take the opportunity recently to remind you. He recently posted to Instagram, showing that at 35 years of age, he can still deliver on some solid lifts in the gym. In fact, he did this by blowing through a massive 262.5kg (578.7lb) bench press double like it is a warm-up.

Take a look at the crazy performance:

This was quite a strong showing from Sapozhonkov. For his last several meets, Andrey has been doing bench only meets. Even then, this performance is better than most of the best lifts he has had in these meets.

He really has been on another level with his bench lately. Here he is, just a few days earlier going three sets on five reps of a 212.5kg (468.5lb) bench. Again, he made this look nearly effortless.

Andrey Sapozhonkov is already firmly established as one of the best powerlifters in the world today. Regardless it is still impressive to see this types of performances from him. He has been keeping quite an active competition schedule, so it is safe to say he will likely be back in action as soon as he can.