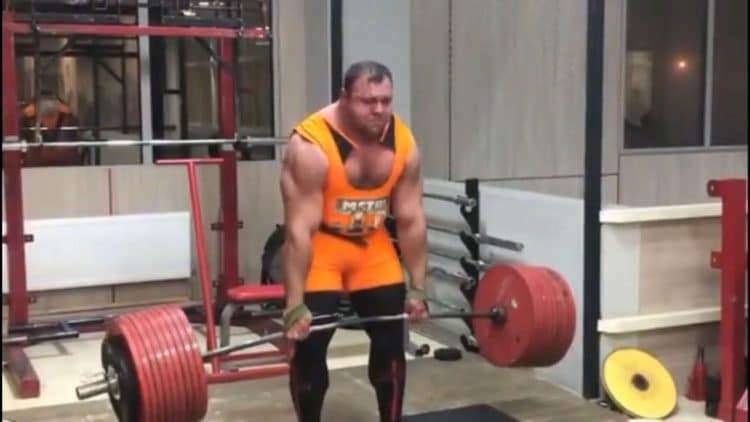 We are mere days away from potentially witnessing the greatest feat of strength ever achieved. The Mountain will be taking on Eddie Hall’s deadlift record and be looking to raise the record for at least a kilo. As the deadlift attempt approaches, Thor has been throwing out numbers like 520kg and 530kg as potential records he will hypothetically aim to achieve if he reaches a certain number of youtube and twitch subscribers.

Amidst all this hype and inhuman weight being mentioned, another news popped up. Ivan Makarov, a former circus Strongman from Russia recently posted a lengthy post on his Instagram.

You might remember the name “Ivan Makarov” as he got the entire strength world rilled up with his 501 kg deadlift attempt back in December. Not much has been seen or heard from him until a few days ago when he posted the following.

Very soon everything will begin! My preparations for September will begin, for the World Cup which will be held in England. This time the preparations will be deliberate, competent, because I had an intelligent coach, at the time when I was preparing for 501 last time I had serious health problems, only my relatives knew this, how bad it was to me, I was on the verge of speaking in one word, but I never give up, and always go to the end.

I believe that you need to live life with dignity, die with dignity, be a coward, it’s better not to be at all. Now I put my health in order, for the first time after me rest of the year as it should, I’m ready, full of strength and energy to go through the bar we have set .a decent 520kg! And remember, nothing is impossible, the main thing is to have enough health. I’m a damn madman who goes all the way

Ivan basically explains that the reason he didn’t manage to pull the much talked about 501kg is that he was very sick in the preparation leading up to the lift and now he is rested, focused, and hyped for a world record deadlift. In the post, he says his deadlift attempt will be held a world cup in England(perhaps it will be an upcoming Giants Live event) in September and the weight he will be aiming to lift is-520kg. Ivan isn’t as trophied in Strongman achievements as may of his peers that attempted and/or succeeded +450kg deadlifts, but he is strong.

He has Instagram videos where he is pulling +500kg from blocks and on the night he tried 501kg it looked like he potentially has the weight in him, just not on that given day.

However, going from 470kg(his best lift on the night he tried to go for 501kg) to 520kg is a giant leap. Also, since Thor recently pulled a very comfy looking 470kg deadlift we can do some visual math and try comparing the two. Luckily for me, the good folks over at powerliftingmotivation on Instagram, did the dirty work so my lazy ass doesn’t have too.

As you can see in the video above, Ivan’s best lift is something Hafthor is casually playing with. Yes, this only proves that Thor is a monster and that Ivan didn’t have the weight on that particular day. A lot can change in a year. I, personally believe Ivan could equal Eddie’s record and maybe even do 501kg. However, 520kg sounds like a lot of work which he might not be able to handle at the moment.