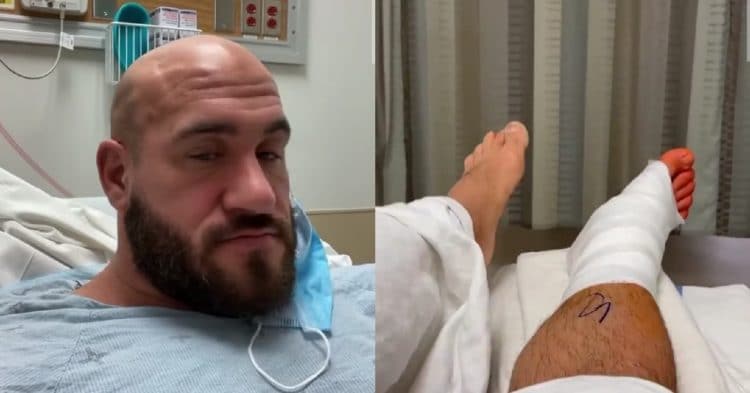 It is not uncommon for elite bodybuilders to spend some time in the hospital, dealing with some injuries. The recent trip that Antoine Vaillant took to help with an ankle injury left him worried in a pretty hilarious way.

As his pro career chugs on, Vaillant has begun to grow into a solid talent in the Open Bodybuilding ranks. He had the best performance of his career recently, when he scored first at the California Pro, before landing in 14th at the Olympia.

While he is not rated as one of the most interesting prospects in the sport, he is still showing some serious potential. He even helped by weighing in on the fake tan debate that Joe Rogan had recently, after they showed a picture of him on stage.

Unfortunately Antoine Vaillant found himself in the hospital recently. He shared a few clips to his Instagram Story detailing the ordeal, as he shows off his wrapped ankle and explains what brought him to the hospital.

Essentially, he got an arthroscopy, a minimally invasive surgical procedure on his ankle. This was to help with the arthritis and scar tissue in his ankle.

“What I had was an arthroscopy because I have arthritis in my ankles and I have bone spurs and a lot of scar tissue. So we had to get that taken care of,” Vaillant explained.

Antoine also explained that he had an epidural to help with the procedure, with the size of the needle making him uncomfortable. This also resulted in him being unable to move his legs or feel anything below the waist, although he was getting the feeling back in them as time went on.

One specific issue that Vaillant expressed, was the lack of feeling in his nether regions, which he described in hilarious detail that you can hear for yourself. This also meant that if he was unable to urinate soon, he would have to get a catheter, which scared the daylights out of him.

All things considered, it seems like Antoine Vaillant is keeping a positive spirit about him throughout this whole ordeal. He even made light of the catheter fears, even though those were very real (and very understandable) emotions.

Typically the recovery time from an arthroscopy is just a few weeks, so hopefully he will be able to get back to action soon. We, here at Fitness Volt, will be wishing him a speedy recovery during this process.