Antoine Vaillant Looks Ultra Bricked Up, Even In Quarantine 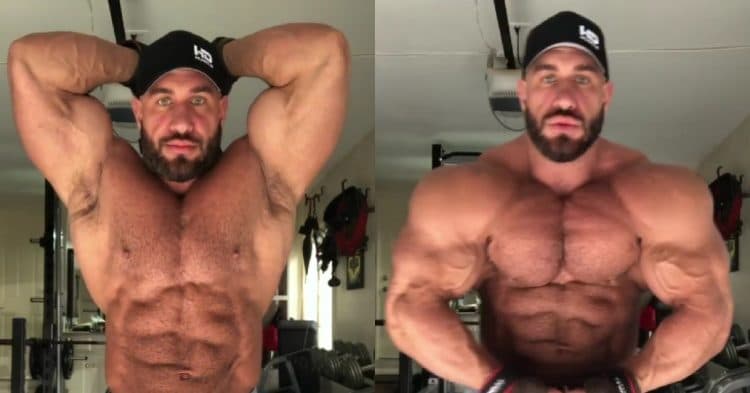 A lot of us have slacked off on our training a bit, during this global health crisis. Not Antoine Vaillant however, who showed us recently that he might actually be more jacked now than he was before this whole thing started.

Vaillant is a Canadian pro bodybuilder and fitness model, who has been competing for the better part of eight years. Competing mostly under the IFBB and CBBF banners, he has seen varying levels of success over the years. His best showing to date has to be scoring 4th place at the 2018 Toronto Pro.

This was all expected to change, as Antoine Vaillant was looking forward to coming to Arnold South America with a new and improved physique. However, when that show was canceled, it would seem that his long-awaited return to competition has been delayed. This was clearly disappointing for Antoine, who has been working to battle back from bicep injuries and has put in a lot of work to slim down in recent months.

Now, Vaillant has taken to Instagram to give his fans a glimpse of what they would have seen, had he been able to compete. It is safe to say that he has not been wasting his time in isolation, as he is completely bricked up. He may even look better than the last time we saw him.

“Some clips I took after today’s garage workout. Weight this morning was 285.8 lbs… finally went back down. I went up as high as 300lbs some evenings… now trying to be around 280lbs. I might lose some fullness since it’s been a few weeks since we released the gas pedal because of all the shows being post poned. @dorian_hamilton is hoping that we all have answers by the end of may. That way a plan could be to start prep again in may. It would be the first time starting prep in this condition at a low weight like this. I’m looking forward to compete it’s been awhile lol! Geez.”

Antoine Vaillant is clearly excited and ready to get back to action. It would be hard to say we are not equally intrigued to see him on the stage again. Unfortunately, we will just have to wait a bit longer to see it.

Hafthor Bjornsson: Eddie Hall ‘Doesn’t Want Me To Take His Legacy Away’ With 501kg Deadlift (EXCLUSIVE)