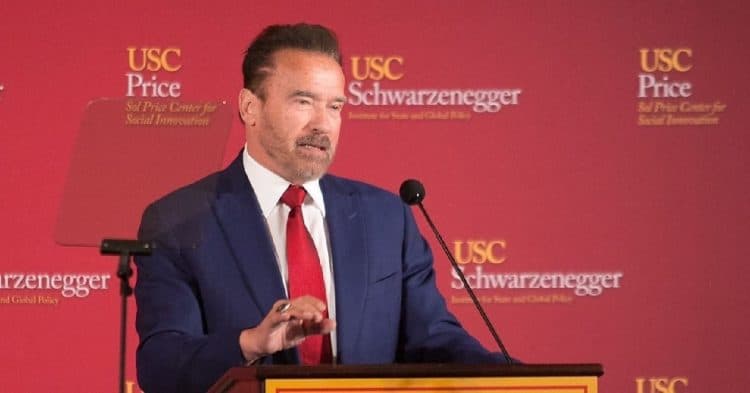 Arnold Schwarzenegger is the type of person that people aspire to be, whether it is for his physical attributes, or his unbelievable success in life. Now he has shared some of the tips he uses to build good habits, in order to train consistently, and get ahead in life.

Few people in this world have had as inspirational of a life as Schwarzenegger. From coming to the U.S. in pursuit of the American Dream, then becoming a bodybuilding great and Hollywood superstar, only to make a transition to politics, he has done it all. As a result, he has literal generations of people who look up to him, aspiring to one day follow in his footsteps.

Of all the different ventures Arnold Schwarzenegger has tried his hand at, there has always been one common theme: hard work. Although this drive and determination comes easily to some, others struggle to stay consistent. Whether it is going to the gym and eating healthy, or pursuing other goals, if you are not always chasing those goals they often fall by the wayside.

Arnold is aware that this is a major roadblock for some people, and has decided to offer some advice to those looking to chase a dream. Speaking recently in an interview, he was asked what having a ritual means to him. He explained that he thinks of rituals more as routines, and then went on to detail how having strong, positive routines can make all the difference in your life.

“I have a routine, which basically means you do something where you don’t have to think much, if at all. I believe that routines are very important, it’s kind of like the foundation to a house or a building, or to anything.“

Arnold goes on to detail his morning routine, of getting up in the morning, riding his bike, and going to the gym. He explains that his training routine is the same every week.

“I go to the gym, and I work out 45 minutes to an hour, and that’s the routine. It’s always kind of the same thing, in that I train arms and deltoids one day, and the next day I do chest and back, and calves and of course abs every day. Then it repeats itself, and that’s just the whole week. What is also routine is that at night I do some extra cardiovascular work before I have dinner.”

At this point, Schwarzenegger explains that it is important to add as many routines into your life as you can. Routines are important, as you can do them without thinking about them. However, he is aware that it hard for some people to actually form those good habits.

“First of all, let me say that for some people this is very difficult. People should just realize that I’m not going to have any sympathy for people who say those things, that it’s difficult, because there a lot of things in life that are difficult. You have to ask yourself the question right off the top: are you going to be one of those guys that backs off every time something is difficult, or do you want to be one of those guys that says it doesn’t matter if it’s easy or difficult, I’m going to go and push through it. That’s me, that’s the person that I want to be, and I’m going to prove it to myself and the rest of the world.

“So yeah there are certain things that are difficult. It may be difficult for people to have a routine, but they just have to go and do that, and they just have to work on it. Whether you go and do something simple like ‘I’m going to get up every morning an hour earlier than I normally wake up,’ then just work on that. Then the next time say ‘Okay, now I’m going to get up early, and I’m going to make my coffee or tea or whatever, and I’m going to go read the paper, even though I haven’t read the paper in the last ten years.’ Just add that to your routine, and don’t even ask if you should or shouldn’t.

“That’s the key thing about a routine is that you don’t ask yourself ‘Should I or shouldn’t I?’ You just do it. We don’t ask ourselves ‘Should I inhale now, or should I exhale now?’ We don’t ask ourselves should we shower every day. There’s certain things that we do, and I think we just add slowly to that kind of routine, because it is extremely important that we do things automatically.”

Now obviously, even someone who sticks to routines as strictly as Arnold Schwarzenegger can have days where he struggles. He offered his advice on that, as well.

“The number one thing is to focus on what is your goal,” Arnold explained. “So you just have to figure out what it takes for you to be on. So when you have a setback, or when you feel sluggish, or when you feel like you’re mentally tired and exhausted, just find your goal again, and find a way to recharge and get going again.”

These are some wise words from Arnold Schwarzenegger. If there is anybody who can teach some tips for succeeding in life, it is him. You can watch the full video below, where he explains how he used this mindset to overcome injuries and other difficulties in his life.