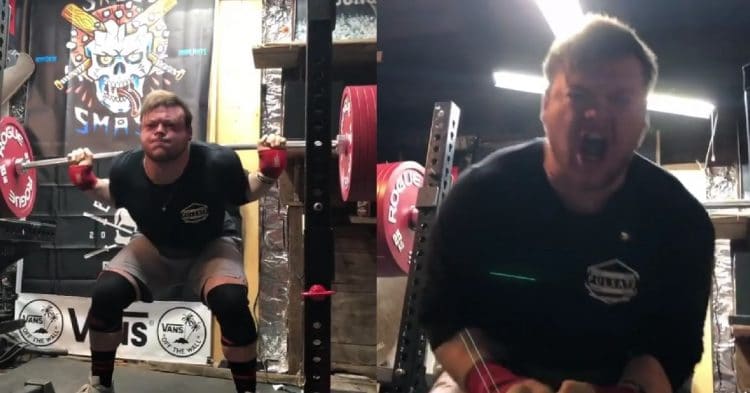 It is not uncommon for athletes to get excited by pushing their limits and accomplishing new records. However, Isaac Whistler showed an intensity not usually seen when he scored a new PR in a recent gym session.

Whistler is a 20 year powerlifter, who has been making some serious waves over the last year or so. He has won state championships, competing as a junior in the 119kg and 125kg divisions. Moreover, he had his biggest win to date, with an impressive performance at the RAW Nationals, last October.

One of the things that stands out about Isaac Whistler the most is the level of intensity he brings to the platform every time he shows up. However, as we got to see recently, with an Instagram post of a recent training session. Here, the young athlete set a new personal record by absolutely annihilating a huge 718lb squat. Following that, he goes absolutely bananas, screaming with excitement at the camera.

When Whistler gets ready to start the squat, he gives a preemptive roar of anticipation. Then he brings the weight down and back up, not even waiting until he re-racks before cheering. Honestly, that is understandable, given how he extended his squat PR by a whopping 11lb!

Isaac has a tendency to get a little pumped up when he squats. Here he is, just a few days earlier, blowing through 696lb. Judging by his reaction, it is safe to say he was a tad bit excited.

His intensity aside, Isaac Whistler is one of the most promising young powerlifters in the world right now. He reaches a huge milestone with this PR, and it will be exciting to see how he looks at his next competition.

The Best Six-Pack Abs Workout You Can Do At Home