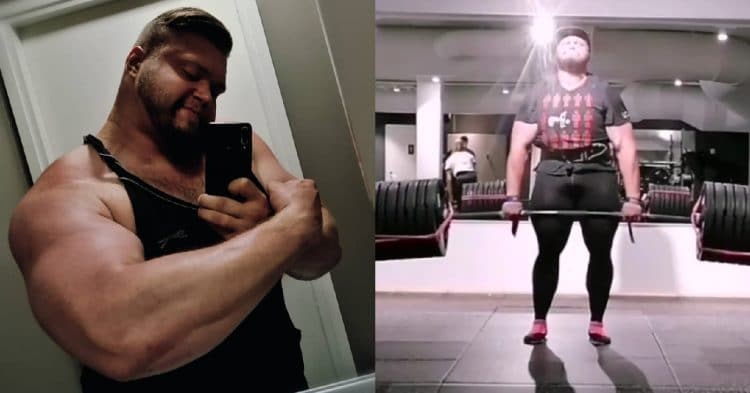 Finland’s Asko Karu is a powerlifter with a strong focus on his deadlifts. He has a big goal in mind, and seems to be well on his way to that goal after a recent training session.

As a +140kg lifter, Karu has attended eight meets in the three years that he has been competing. However in that time he has yet to compete in a full contest, doing deadlift only every time. This has paid off for the 28-year old though, as he has been victorious in every one of his outings, even pulling as much as 887.3lb in his last meet, in December.

Since that performance, Asko Karu has been wholeheartedly focused on improving his skills, with a specific goal in mind. He is aiming to be able to deadlift 1,000lb, and as a recent post to his Instagram showed, he is not too far from accomplishing this. This update saw him effortlessly pulling 926lb for a double, scoring a new personal record along the way.

“❌420kg/925lbs x2❌ F****** FINALLY!! 🍆🍆
.
Whole week been stressful and having ups and downs but gave it all I had today while being angry and letting it all out. Massive PR for me with Stiff bar never would of believed I would peak up at this weight! It’s time to give body a rest now for some weeks and will be hitting on deadlift suit and Deadlift bar eventually. HUNGRY for that 1000lbs! 😈”

In the post, Karu says he is more motivated than ever, and we would be hard pressed to disagree with that. He has been steadily improving and growing with each passing training session. Here he is about a week earlier doing another double, only this time it was a significantly smaller 881lb deadlift.

There have been a ton of radically impressive deadlift performances as of late, but Asko Karu seems to be reaching a new level. It will be exciting to see him attempt 1000lb, and see if he can reach this huge milestone.