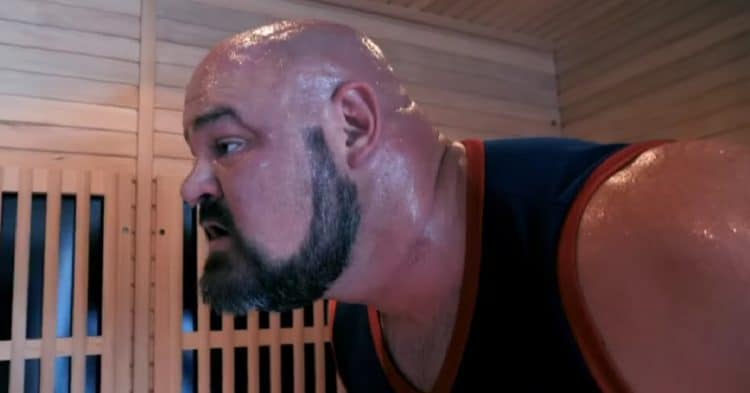 Former World’s Strongest Man Brian Shaw is no stranger to trying his hand at new and unusual things. However he took things to a new level when he decided to give hot yoga a try recently.

Although smaller than some, Shaw is still a massive beast of a man. He has lost a ton of weight in recent years, but at the prime of his career he was an absolute unit, using his size and strength to win multiple strongman events over the years. Even nowadays, the 6’8 athlete weighs about 420lb, making him much larger than average.

Typically someone the size of Brian Shaw is not a very flexible person. In fact the subject of flexibility became a debate between he and his wife, as he explained in a recent video to his YouTube channel. Here he explained that the two were arguing over who was more flexible, and to settle the debate Brian agreed to join his wife for some hot yoga, to see who was more flexible.

As a side note, Shaw wanted to see how much weight he lost during this session. So he weighed in before entering the hot yoga studio, with the scale reading an even 418lb. Then they go into the facility, where it is noted that the temperature in the sauna hovered at about 128 degrees.

“I’m kind of excited to go through it and prove that I’m more flexible than you,” Shaw told his wife. “So I’d win, because obviously that’s the most important thing. I’m also curious how much weight I’m going to lose.”

Getting in the sauna, Brian Shaw is nearly too tall to fit, and be says he has trouble breathing. Nevertheless the pair jump right into the session, which was guided by a video screen in the sauna. As they go through the different poses, Brian seems to struggle more with managing the space, than he does with the actual stretches. He gasses out rather quickly, pouring sweat down his body.

After suffering through the session that he admitted to not being mentally prepared for, Brian Shaw leaves the sauna and heads back to his scale. After sweating profusely and nearly throwing up, Brian lost 6.2lb of water weight, ending the day at 411.8lb. It was certainly a fun thing to see him go through, but he does seem too keen on doing it again.