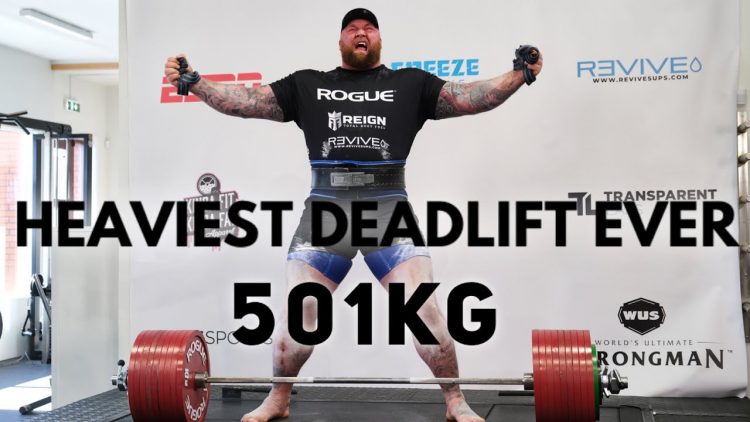 Behind The Scenes 501kg Deadlift

Eddie Hall is no longer the best deadlifter in the world. This time, the title of the biggest and strongest dude on the block goes to the Icelandic giant, Hafthor Bjornsson. By now, you’ve seen the lift, you’ve sent it to your friends and the few of your friends you haven’t sent it to have sent it to you thinking you haven’t seen it. So let’s not waste time decoding the lift or the numbers. Let’s see what was it like being in the presence of not just strength or strongman history, but history in general.

Well firstly, due to all these global shenanigans and lock down there are a few rules they had to obey. Firstly they had to have a maximum number of 20 people in one place and they all had to be 6ft/2m from each other and have minimum physical contact between them. So it was a very minimal crew with only the most essential people being there-a judge, a doctor, a few cameramen, a live commentator, a handful of Thor’s entourages that help him with the deadlift suit and loading the weights and of course his lovely wife. Literally, only the people that have a crucial role in helping Hafthor achieve the record-breaking lift, with the grand total of present people being 16.

Behind the scenes and off-camera, Thor was slowly ramping up the weights with some warm-up sets that started with a comically small 70kg.  However, any proper gym bro and trainer will tell that warm-up is the key to a great workout and it keeps you injury-free. If it’s to believe the footage that Thor’s crew recorded for the behind the scenes video, his top warm-up set was 375kg. Which, half the guys on the planet would sell their soul to have as a lifetime 1 rep max.

While Thor was warming up, the calibrated Rogue plates were being weighed to remove any shadow of a doubt that there was any kind of trickery or social media magic to this lift.  Between the sets, Hafthor is seen sitting, mean-mugging, and in the zone. The doctor is seen monitoring Hafthor from a safe distance and instructing the wife how to help if he sees anything worrying with Thor.

After the monstrous lift, Thor was bursting with energy and happiness. He hugged his teammates, embraced his wife, and exchanged thoughts with the commentator.  What followed was something WWE’s Vince McMahon wishes he could script. Hafthor reveled a sponsor contacted with a 7 figure contract to fight former rival Eddie Hall in a boxing match. An offer that Eddie didn’t waste much time in accepting over his official Instagram profile.

So there you have it….history has been made and now we wait for Godzilla to face off against King Kong in a boxing ring. Purely speculating, but I am willing to bet that when this fight happens and the sponsorship deals start showering the two titans with cash, both men will make more money for that one single fight than many boxers(or professional athletes) will over a career span of fighting.