It's on like Donkey Kong between the two Strongman elites! 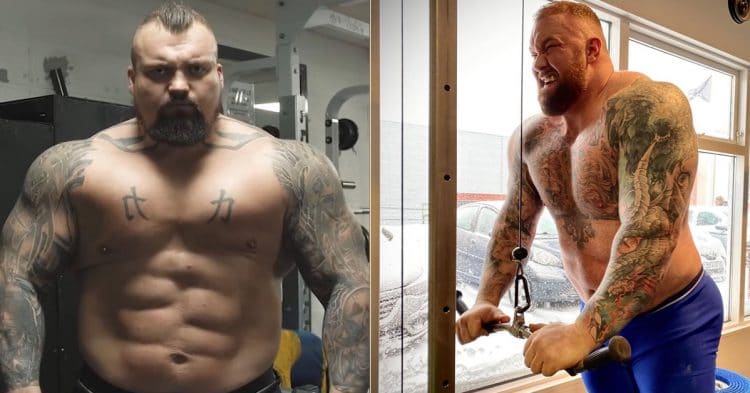 It all started with a Q&A session when the legendary Strongman Eddie Hall said he’d beat possibly the best competitor in Strongman today in Hafthor Bjornsson in a fight, several months ago. Well, Thor agreed to a boxing match not long after, but we didn’t hear much more about the potential match after that.

But then when Bjornsson decided he that he wanted to break Hall’s 500kg/1102lb deadlift world record, well, the latter wasn’t too thrilled since it wouldn’t be done in real competition. So naturally, the Brit voiced his opinions about the decision before Thor fired back, explaining that he was robbed in 2017 when Hall won the World’s Strongest Man competition.

So, of course, they went back and forth a little. Then Bjornsson went on to break Hall’s deadlift world record today by pulling a massive 501kg/1105lbs before challenging the latter to a boxing match.

Well, Eddie Hall just accepted the challenge via Instagram and this is what he wrote…

Well what can I say well-done to Hafthor Bjornsson today for lifting 501kgs in his home gym.. genuinely that has got my respect from me to you Thor, big well done, I know what it takes. I still stand by what i say where as i think this should be done in proper competition. Get rid of all the negativity, prove everybody wrong.

Hall said that he’d be naive to think that no one would beat his 500kg deadlift record and he also explained that he wanted someone to beat it. But he still wasn’t convinced that the lift is as good as doing it in competition.

Oh, and he’s definitely signing the contract offer from Core Sports of which Bjornsson was also offered a contract. However, in the call out, Bjornsson explained that he already signed with them and that Hall needs to as well which would definitely set up for a new rivalry. But Hall said in the video that he’ll sign the contract, not because his deadlift record was broken or even for the money.

“It’s because you called me a cheat at the World’s Strongest Man 2017, I can’t put it to bed. I can’t forget it, people may forget it, but you never sort of apologized, you never said it was right. You think that you were stronger than me at World’s Strongest Man 2017, regardless of if the trophy is there or not, this is in your head, you think you should have won that year.”

“And you let people know that and I can’t have that. That is why I’m going to sign these papers and I want to teach you a lesson. And that lesson is going to be knocking you the f–k out.”

Hall explained how he was always underestimated but yet he still proved people wrong by winning the World’s Strongest Man in 2017. The Englishman said he doesn’t care if Thor is a giant at 6’9″. He’s confident that he’ll still do everything better than him to prepare for their showdown.

“I’m going to do everything in my power to step in that ring and rip your f—ing head off. So Thor, get training, I will see you in the ring in the future and we’re going to get this on.”

Eddie Hall is no stranger to taking on challenges and holding his own which has been evident by his ambitious endeavors seen on his YouTube. Whether he’s breaking CrossFit world records, going head-to-head with the world’s best bench presser, learning how to do a backflip, or learning arm wrestling so he can take on one of the world’s best, Hall just doesn’t seem like the behemoth to back down.

But he also shares this trait with Hafthor Bjornsson who is at the top of the Strongman game right now. So, if this boxing match does happen, we’ll be sure to fill you in because we don’t want you to miss it.