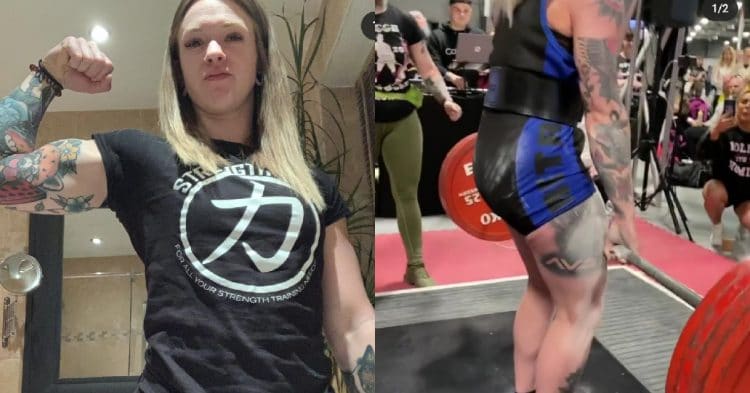 The junior side of the powerlifting scene is pumping out some seriously talented prospects. Not least of those is 23 year old Beth Lovatt, who had a big performance over the weekend.

Lovatt is a young powerlifting sensation, competing out of England. She has competed at a handful of meets, over the course of her six year career. Her biggest win came in the 2019 British Championship, where she smoked the competition, going 8/9 on her lifts.

However what put Beth Lovatt on our radar this time, was her performance at the Tattooed and Strong Push Pull event. The meet, which went down Manchester, England, saw her hit a solid 226lb bench press. However what was perhaps most impressive was the insanely huge 530lb deadlift that she smashed through. It was an impressive performance, especially considering the fact that she weighed in at 164lb for the meet, making this three times her bodyweight.

“I’m back bitches!
Here’s my two best lifts from T&S this weekend!
240kg deadlift and 102.5kg bench 😭
Thank you to everyone who has helped me along the way and especially for this prep. Words cannot describe how much this comp has meant to me!
@wheels92 thank you so much for everything you do for me. I wouldn’t be the person I am today without you.
Also thank you to @tattooedandstrong for always putting on the best powerlifting comps I’ve ever been to. You’re something else!
And last but definitely not least thank you to @tommartinpl for putting up with my shit and getting me to where I am in such a short space of time 😂”

Lovatt has been working hard on improving her deadlifts. That work has been clearly paying off, if this performance was any indication. Here she is, a few weeks earlier, breezing through a 496lb double.

Beth Lovatt is proving to be one of those brightest young powerlifters England has to offer. Watching her grow and improve is going to be exciting.