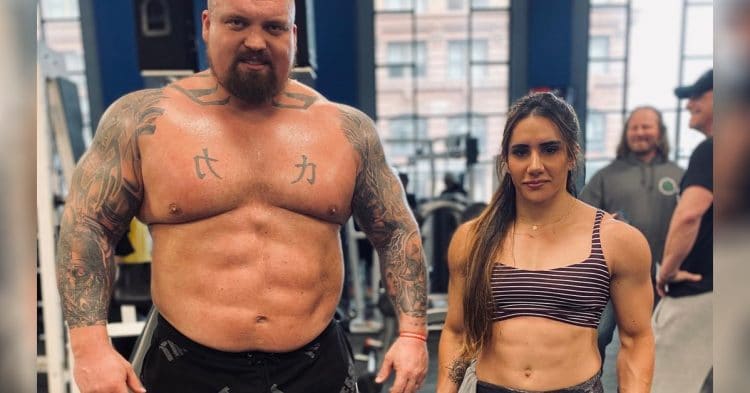 The very popular Strongman athlete Eddie Hall usually features guests on his YouTube channel whether he’s training with them or taking them on in their respective discipline head-to-head. He recently broke a CrossFit world record and is currently training to take on an arm wrestling champion soon.

But during this past weekend, the 2017 World’s Strongest Man champion and world record holder in the deadlift (500kg); met up with elite powerlifter Stefi Cohen for a shoulder session.

Dr. Cohen holds 25 powerlifting world records (set three records in one meet last month) and is an absolute beast with a 698.11 Wilks score (wraps) which puts her near the very top of powerlifting achievements.

But the two strength athletes trained at a gym in Columbus Ohio during the Arnold Classic weekend actually just before heading over to the convention center. Hall explained that spectators were not allowed to attend the EXPO this which was unfortunate.

But the show went on anyway. Hall first talked a little about Stefi Cohen and then they got straight into the workout. The session consisted of multiple exercises such as the dumbbell lateral raise, then they did the dumbbell press, working up in weight.

In between, Hall was asked about his achievements where he explained few records such as the all-time deadlift record and new Isabel CrossFit record to name a few.

Next was the rear delt raise for as many reps as possible followed by the smith machine shoulder press. Then Hall gave a little inspirational talk about his failures leading up to his 2017 World’s Strongest Man title. He explained how he had a hand injury a day before the 2016 WSM competition and was upset that he missed out on the win because of that.

However, it was only a year later that’d cement his name in the history books which was an amazing achievement for him and a life lesson.

To finish off the workout, they did the Cuban press followed by a brutal finisher of dumbbell front raises, military press, around the world using plates, seated dumbbell presses, side lateral raises and another round after that.

Both made it through the session although they had to be extremely exhausted as it looked intense. Eddie Hall acknowledged how strong Stefi Cohen was and she was able to hang in and even do one more rep than he did for the last set of dumbbell presses.

You can watch the entire workout below…