Check out the truck pull training seven weeks ahead of the 2019 World's Strongest Man competition! 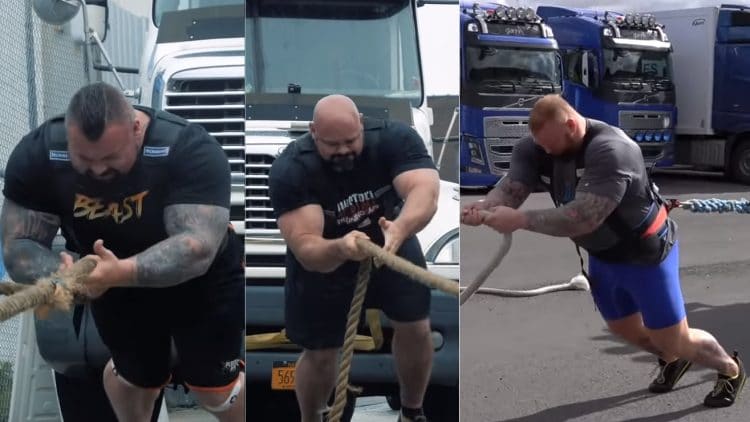 The biggest Strongman competition in the World (World’s Strongest Man) is just around the corner and it will feature the biggest name in the sport going head to head. Bradenton, Fl will host the competition June 13th – June 16th and athletes are training hard just seven weeks out.

The defending WSM champion Hafthor Bjornsson and last year’s fourth-place finisher Martins Licis teamed up in Iceland for an intense training session. The video jumped right into warms ups and then the 200-meter truck pulls. Then the rest of the video involved high-rep squats with a safety bar, deficit deadlifts, and heavy static grip training.

Then the 4-time WSM winner Brian Shaw (2011, 2013, 2015, 2016), and 2017 WSM champion Eddie Hall got together for their own truck pulling session. The two joined forces in New York City where Hall is filming his new show “Hall eats America” which will guest star Brian Shaw.

The video started with some playful banter between the two heavyweights, followed by some back and shoulder training, and finally the 50,000-pound semi-truck pull…

And if you’re wondering what the result was… Shaw beat Hall by two seconds. It was a great training session and afterward, they tackled another big challenge in the form of a 7-pound deli sandwich.

But unfortunately, they didn’t show this part.

Bodybuilder Gets Emergency Surgery After Eating Too Much Protein