Brad Crawford Demolishes Gigantic 854.3lb Squat Like It Is Nothing 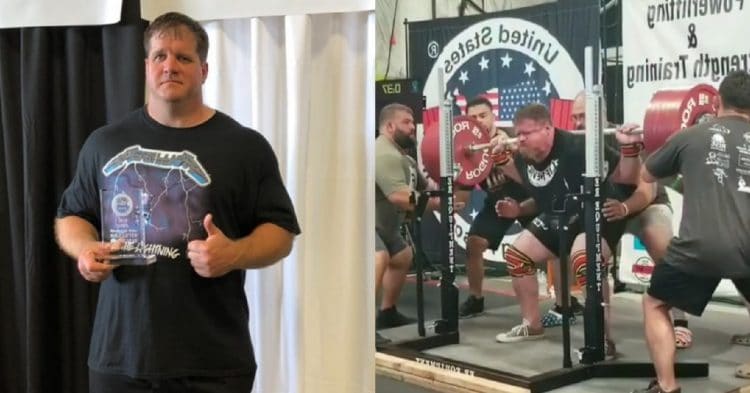 Although he did not start competing as a powerlifter until the age of 34, Brad Crawford has shown the types of performances that are more common out of a veteran athlete. This skill was seen recently, at his most recent powerlifting meet.

Beginning his career in 2015, Crawford made an impression almost immediately. Right off the bat he was putting up some solid numbers, showing that he has the skill to make up for the lack of experience that most athletes have at this point. Not only has this skill led him to the top of record books, but he also won almost every meet he has competed in so far.

Fans got to take another look at the impressive skills of Brad Crawford recently, when he took part in a meet at the Iron House Strength Training and Powerlifting Facility. Here, he went 6 for 9 on his lifts, accumulating a 2304lb total along the way. This total was made up of a 562.2lb bench press, and 887.4lb deadlift. However what was most impressive was the lift he shared to his Instagram, which was an 854.4lb squat, that he hit nearly effortlessly.

This squat was impressive, but it was something Crawford had been working towards for a while. Here he is, just before the meet, in the last squat session he shared on social media. This time though, it was an 820lb lift that he hit for a double.

There is a seemingly endless supply of masters powerlifters, but few have shown the type of raw talent that Brad Crawford has over his five year long career. 2020 has been slow for his competitive schedule, likely due to things outside his control. Hopefully he can get another meet in before the end of the year, so we can see how he is looking later on.