What better way to celebrate a birthday than with a 500lb driveway deadlift! 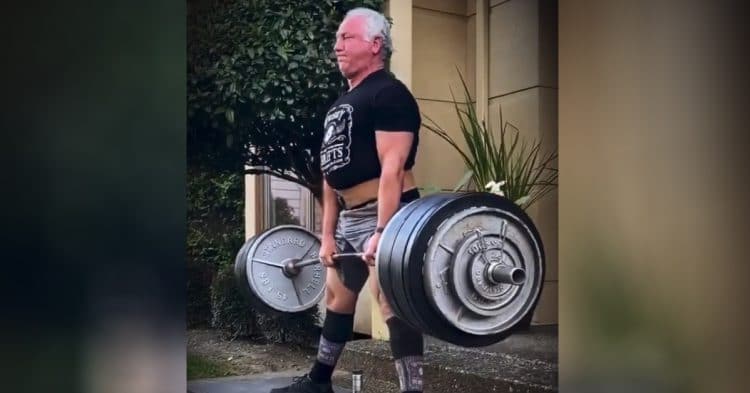 Rudy Kadlub is the co-founder and CEO of Kabuki Strength Lab (gym and equipment manufacturer), along with legendary powerlifter Chris ‘Mad Scientist’ Duffin. So naturally, the latter called his good friend and business partner to sing him a happy birthday today.
But Kadlub wasn’t content with just any ordinary 71st birthday, telling Duffin of his plans to do a driveway deadlift of 500lbs to celebrate. Then again, he’s no ordinary 71-year-old either! Kadlub began powerlifting competitively at 55 years old and currently holds multiple American and world records.
And last year just a few weeks after turning 70, Kadlub pulled 505lbs for a double in training for a Masters competition. So it’s pretty obvious that he’s passionate about moving big poundages.
Here’s what Chris Duffin wrote on Instagram about his friend…

“Called my friend and business partner Rudy this am to sing him happy birthday and he told me this was his plan to celebrate today. Amazing weather for a driveway pull and a little whisky pull as well. Happy 71st my man!”

Birthday #WhiskeyAndDeadlifts for Kabuki co-founder and CEO @rudykadlub who turned 71 today 🎂
–
Ended with 500 after a near miss at the top (grip) with a 520 PR attempt. Will hit this when back in The Lab under better conditions, and more whiskey!

Check out the lift below…

After the lift, Kadlub can be heard saying “I still got it baby!“

And he’s definitely right about that. For 71 years old, that’s a lot of weight to pull but it’s not surprising either as it’s not his first time doing it. He originally tried 520lb but just missed as he wrote on the post. But he explained that he’ll attempt it again once he’s back training in the lab under better conditions.

Chris Duffin, on the other hand, made history a few weeks ago by performing his ‘last feat of strength‘ which came in the form of a 1,001lb squat for 3. And good thing he got it in while he could because it was now or never for him especially with all of the uncertainty currently. The feat made Duffin the first man to squat and deadlift 1000+ pounds for reps.

All-in-all, it hasn’t been a bad year as we’ve seen many impressive lifts and hopefully this situation subsides soon so we can see a lot more!