The 2019 Mr. Olympia champion Brandon Curry is determined to bring the best shoulder development at the 2021 Olympia. 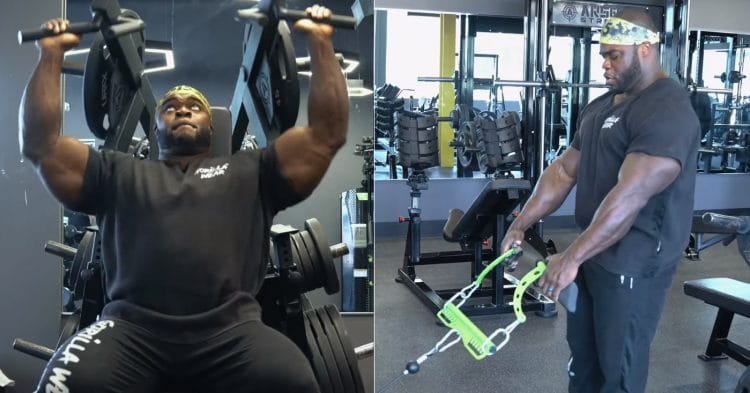 The 2019 Mr. Olympia champion Brandon Curry didn’t quite get the result he wanted at the 2020 Olympia in December, taking second place behind Big Ramy. But at least he beat 7x Mr. Olympia Phil Heath which was the plan going in. But the former champ will be back at the 2021 Olympia in October and he vows to have the best shoulders at the show in addition to a more complete package. This was evident by a recent shoulder session posted to his YouTube titled, “I Will Have The Best Shoulders At The Olympia (THIS IS HOW).”

In the video, Curry mentioned training for the 3D effect that has a lot to do with developing the rear and lateral delts. He also mentioned experiencing a winged scapula (weakened shoulder blades) during a recent bench session that bothered him a bit but he was ready to blast his delts while taking care to not aggravate the issue.

Curry started off with the reverse pec deck; one of the best exercises for isolating the rear delts and helping to create that 3D look. The movement places you in an advantageous position to be able to lift heavy but maintain good form to maximize rear delt activation.

After that, he moves over to the machine lateral raise to hammer the outer head of the delts. It’s a great alternative to the dumbbell lateral raise because similar to the pec deck, it doesn’t require as much stabilization and it ensures the arms move symmetrically up and down.

Curry made some good points that cannot be stress enough. He said that most people have pretty strong front delts from doing pressing exercises but are lacking good rear and side delts development.

“What most people are lacking to not get that full round boulder look is the rear delts, side delts development that they need.“

He explained how important it is to have well-rounded (pun-intended) deltoids to get that highly-desirable and crucial 3D effect.

Next was a cable face pull and upright row combo using a unique double-grip handle to hit the lateral and rear heads at the same time. These exercises are excellent for building the traps, upper back muscles, and rear and lateral delts.

Another benefit of using this exercise combo was the mechanical advantage of starting with the more challenging high pull and finishing with the upright row, allowing him to complete more reps; compounding fatigue as he called it.

Curry transitioned to an interesting variation of the Smith machine shoulder press where he stood at an angle and used one arm at a time. It allows him to use a body angle that’s most comfortable for him and also helps to maintain his shoulder health as he feels no pain with this movement.

He makes sure to keep his hands close to his body and elbows in front of his body during the movement. In addition, he keeps the range of motion at the lower and middle portion to keep tension on the muscles and not the joints while avoiding too much triceps involvement.

Curry finished off with the seated plate-loaded shoulder press next followed by a machine lateral raise variation and the machine front raise.

We’ve listed all the exercises from his workout below.

Watch the full session below