Brian Shaw Takes On His Wife In At-Home Workout Challenge! 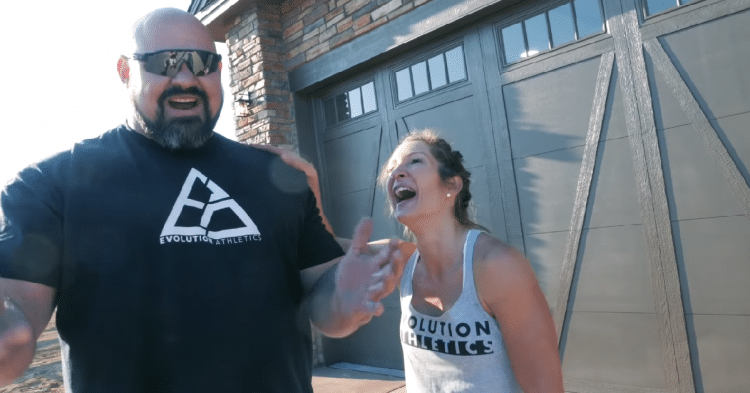 Things can be kind of boring when you are forced to workout at home. However Brian Shaw was able to find a fun way to enjoy his limited exercise abilities.

Shaw has it a lot easier than most during these challenging times. He recently completed a very nice home gym set-up, just in time for gyms to start being temporarily closed. As far as being forced to stay at home is concerned, he has it pretty good.

Even then, it is still pretty easy for Shaw to get bored with this. Therefore he decided to spice things up the best he could, and involve his wife along the way. In his most recent YouTube video, he and his wife Keri went head to head in a fitness challenge using their home gym.

The two start off by joking about how they are each sore losers. Shaw likes to include his wife in workouts on a fairly regular basis, constantly challenging each other. Then they begin with the first event, the Toilet Paper Roll Shooting Challenge.

This challenge consists of toilet paper on traffic cones, as Brian and Keri race to toss them into a trash can. Throughout this race things are intense, with Brian narrowly winning. It is a fun way to play on the toilet paper shortage that has been happening, but they assure us they are not wasting these rolls.

“The one that I missed like ten times, that’s going to be your roll of toilet paper,” Kerri jokes. “We actually have to use these.”

“Yes we do,” added Brian. “We’re not just playing with toilet paper we’re going to throw away, because we’re legitimately running out.”

Next Brian Shaw introduces the Tank Protein Push. Here they use a Torque Fitness tank. To make it fair, they have Keri at a lower resistance than Brian. It is a relay race, which involved them loading and unloading various proteins. Keri goes first, scoring a time of 32.74 seconds, while Brian was a little slower at 37.66.

With their scores tied, Brian and Keri move on to their third challenge, Ground to Overheads with bags of rice. They count as many reps as they can do, Keri with one bag and Brian with two, in a 30-second span. However, she forgot to stop them so they went to 50 seconds instead. Regardless, they were both tied at 17 in 30 seconds.

Brian and Keri Shaw conclude by saying that they are trying to stay as positive as they can during these challenging times. All they want to do is make the best out of a difficult situation.