Video: Brian Shaw And His Wife Train Truck Pull Together

Brian Shaw Does Training With His Wife 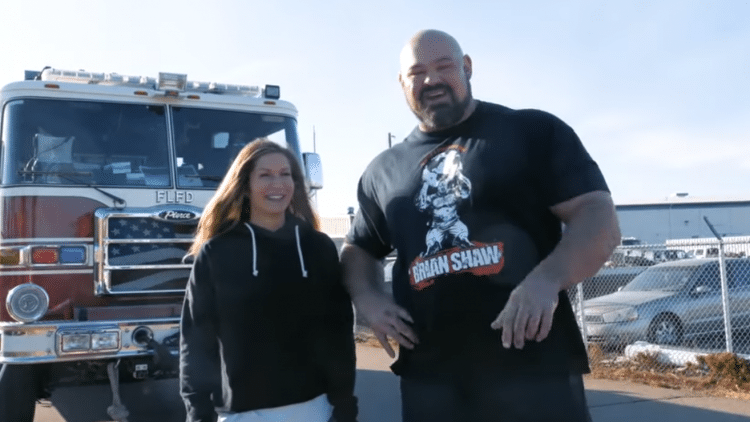 Brian Shaw has had some lackluster performances while competing as of late. However, he is looking to turn that around by training with his wife, Keri.

Shaw is one of the best athletes in Strongman competition, having won the World’s Strongest Man four times. Despite that, he has been on a bit of a skid lately, with some less than ideal showings. At the 2019 WSM, he scored sixth place, his lowest placing ever. Furthermore, at the Arnold Strongman Europe, he landed in seventh place.

Not only is he training, but in a recent video he uploaded, Shaw shows that he is training with his wife. Keri Shaw is a fitness enthusiast, known for uploading her own videos, doing CrossFit workouts. Nevertheless, she is able to go toe to toe with Shaw, as you can see in this video.

The video features Shaw doing various workouts, getting some solid strongman training in. It is about nine minutes into the video, where Keri Shaw makes an appearance. Subsequently, he brings her in to help him do some truck pulling training. According to him, she helps him with motivation during difficult workouts. The two are clearly a power couple, as Brian is able to pull a 50,000lb fire truck.

Brian Shaw is looking to compete at the World’s Ultimate Strongman on October 25th. He says that he is feeling great headed into the competition, so hopefully, that will show. Perhaps it is the help of his wife Keri that will make the difference moving forward,