Strongman veteran shares a look at his impressive home gym 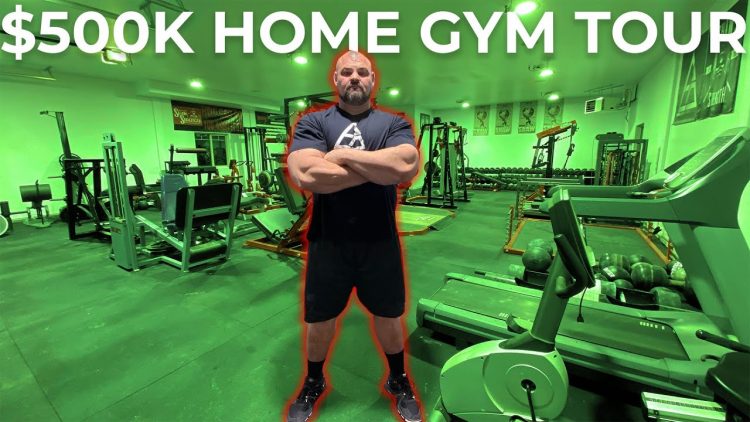 It’s finally here, Brian Shaw’s impressive and one of the biggest and most expensive home gyms ever made.  Brian has been posting updates on the long-awaited home gym and with each update, he was inching closer and closer to finally finishing the impressive home gym.

Being a huge man with otherworldly proportions meant that a lot of equipment would have to be custom made. For instance, he mentions he had to buy a monolift because when he trains with his friends he is often the biggest and tallest of the bunch. This would mean either constant adjusting of the squat rack while training with the boys or being forced to perform an extra rep with a half/quarter squat after he’s done with his set. Which gets quite complicated once you realize Brian can squat +800 lbs for reps and any extra second with that amount of weight on your back is energy draining.

Since his home gym has $500k worth of equipment, it would get real boring real fast just trying to list all the items he has in this badass gym. However, there’s a couple of items that pop up right away that are worth mentioning, like; Rogue 203lbs monster kettlebell, dumbbell full-stack rack, Circus dumbbells Powerlifting Monolift, Rogue “Donkey”.  With all this, he also has plates upon plates upon plates with varied size, weight, and function. Accompanied by a whole bunch of barbells.

Brian’s home gym is quite possibly the single greatest none commercial gym that’s ever been made. It’s arranged by a hardcore gym head for hardcore gym heads. Brian also mentioned that the majority of his Strongman specific equipment like Atlas stones or Fingal’s fingers are in a separate storage facility he owns and that he will bring them to the gym on a “case by case” basis.

Even though Brian says that this is the final edition of his gym, something tells me he will be adding more stuff to the gym sooner or later. In an earlier video, he mentions that he not only does he enjoy working out but he also qualifies gym equipment collection as a hobby. Which, everyone with a hobby will tell you, the collection never ends, it’s always expanding.