The collaboration you didn't know you needed in your life 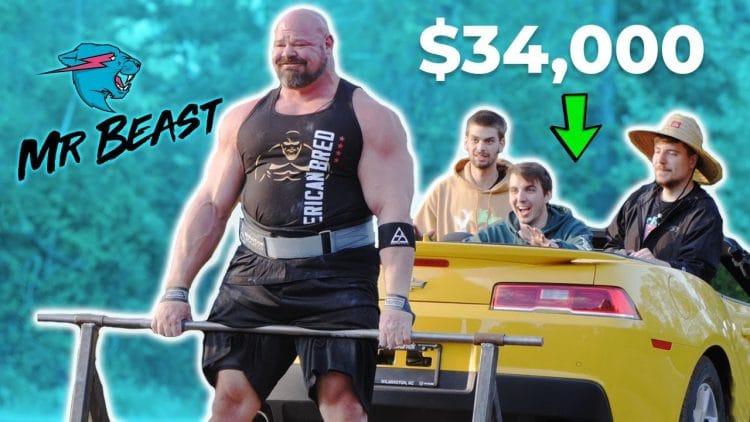 Mr. Beast is one of those wacky YouTubers that does INSANE giveaways and stunts.  Most recently he put 3 strangers in a warehouse full of cash and told them they have a minute to collect as much money as they can. Which is presented as funny and wholesome but to be honest, sounds like it could turn into a horror movie real quick.

For his latest stunt he acquired the help of 4xWorld’s Strongest Man winner Brian Shaw.  The premise of the sales pitch Brian got from Mr. Beast was that if he could deadlift the shiny new Camero- he gets to keep it and I can already imagine Brian Shaw laughing to himself in his head while hearing this pitch; “ha ha this dude really has no idea that deadlifting cars is basically my job”.

Regardless, Mr. Beast does a quick demonstration to prove that neither he nor his 2 buds can deadlift that car together. Brian Shaw puts on a smile on his face and goes to work. Deadlifting goes as you can imagine, and Brian decides to up the odds by telling Mr. Beast and his buds to hop into the car and let him try again.

This again goes as what it will go when you tell a guy that deadlifts for a living to deadlift something. Brian lifts the car without much effort and Brian decides to rep it out with the three of the dudes in the car.

Later on, the guys have a bench press competition- but with a Mr. Beast twist. This time they will be benching a couple of grand in one-dollar bills, making it probably the most expensive bench press in the world.