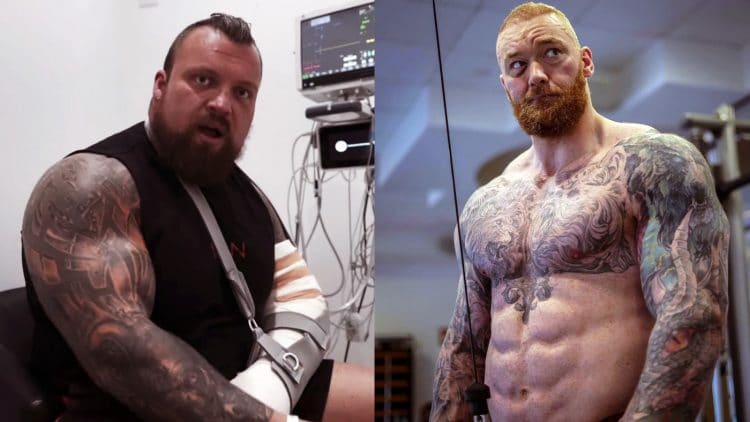 Well, this certainly sucks. Eddie Hall just announced on his Instagram that his boxing match with Thor Bjornsson will have to wait a while. The reasoning sucks ass-he de attached his biceps and had to have it reattached. The long-short of if all is that Eddie threw a loose hook and felt a pop in his bicep which required surgery.

I’m so devastated to say I detached my bicep on Monday but Iv already got it reattached on Thursday AWAKE and recovery is going well. Unfortunately this means the fight between me and Thor will be rescheduled but the @coresportsworld fight night is still going ahead sept 18th and all PPV’s will carry over and inc the rescheduled fight night also.

Ticket wise:- Emails will be sent out to everyone with options and I can’t thank everyone enough for the support and hope everyone is staying safe out there

As you can read and see above, it was just one of those things that happen when training for a fight. Tyson Fury recently also had to pull out of his trilogy fight with Deontay Wilder due to covid, stuff just happens.

Eddie Hall, being the hardcore maniac that he is, has already done the bicep reattachment(wide awake) and the road to recovery is well on its way. So that’s good news, which would potentially even mean that the fight could happen before the year ends.

Now, this leaves the monster from the land of ice and snow without a dance partner for his September date and according to his Instagram, he will be fighting in September.

Super disappointed but this is not in my hands. Next up is finding a new opponent so I can fight in September. I’m taking this extremely serious and I’ll be even more prepared. When Eddie is ready, I’ll be waiting

📝@EddieHallWSM has suffered an injury, and his planned September fight with @ThorBjornsson_ has been postponed.

The rest of the card goes ahead as planned, including Josh Bridges vs. Jacob Heppner, @avrilmathie, Stefi Cohen and more.

So who will Thor fight in September? Well…your guess is as good as mine, but a potential contender has already thrown his name.

Now, I have no idea how serious is Robert Oberst in his call out but it’s an interesting opponent if he is serious. Oberst has been talking about doing some kind of boxing match for at least a few years now.  As of this writing, no confirmation has been given about this potential showdown between two giants but it’s an interesting talking subject.

In a recent interview with FitnessVolt Robert Oberst gives his prediction for Hafthor Bjornsson vs Eddie Hall:

“My prediction is Stefi Cohen jumps in and knocks them both out,” Oberst said with a chuckle. “I think Eddie’s going to knock him out, I really do. I just feel like, after being around the guys a lot and knowing them, Eddie’s a much more violent character.

“Thor is softer on the inside, in a good way… I think Ed will be able to take a punch better than Thor. But then again, I’m not super confident, I wouldn’t bet the house… I think second round.”

You can watch the full interview here.

Also, I am now even more leaning towards Thor in winning the now postponed fight between himself and Eddie. Should Thor continue to pick his “warm-up” fights carefully and rack up another fight or two under his belt, that could be enough experience to outlast Eddie Hall in a potential fight.

When and where will this Strongman beef be settled is still unknown. I’m guessing Eddie will want a full camp with about 2-3 months of uninterrupted preparation for Thor. So even if  Eddie was medically cleared today, the fight could happen around November at the earliest.

Now add to this, any potential injury Thor picks up along the way plus Eddie’s bicep situation it could potentially push this fight to early spring of 2022.