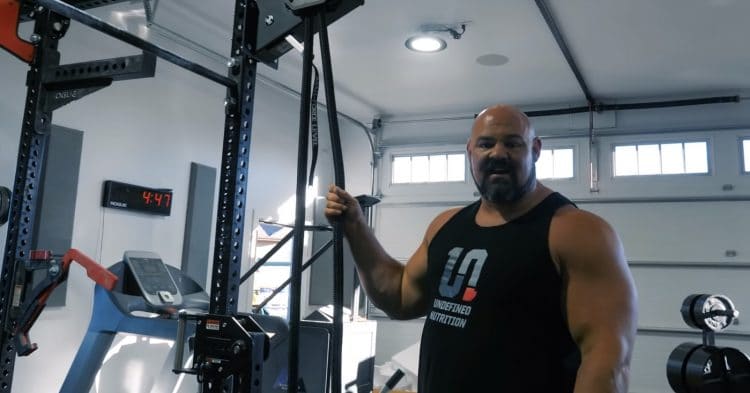 Some men collect vintage baseball cards, other men have project cars or play video games. Then you have Brian Shaw, who collects gym equipment for his ever-expanding, ginormous, home gym. Brian is a 4x WSM winner with a list of pro Strongman wins, achievements, and records a mile long.

If you followed our articles documenting his home gym saga, you know by now that it’s ridiculously big (that’s what she said) and that it’s probably the best equipped and most expensive(worth well over $500k )privately owned gym in the world right now.

Brian has so much gym-related stuff that he even has other “small scale” storage unit gyms in which he does some specific Strongman training. I still can’t quite wrap my mind around the amount of workout-related products he owns.

So naturally, when you own the arguably biggest non-commercial workout station, you buy even more gym equipment. This time Brian got his hands on some “deep dish”25lbs, 45lbs, 100lb plates, a few plate holders, an endless rope trainer, and a “Tank MX”.  Now let’s explain what all this is.

1. The “deep dish” plates are Rogue’s homage to the old-school plates that have a, as you may have already guessed it, deep-dish look to them. Meaning, the edges of the plates are sticking out and the interior is sunken in. At the end of the day it’s still just a bunch of plates but you gotta admit they do look kinda cool.

2.  Since he got himself a bunch of new lifting plates, it would be a shame for them to just lay around on the ground. They need to be placed and displayed for proper use. So for that, Brian Shaw got himself two new plate trees to carry all these heavy-ass weights.

3. Endless rope trainer is exactly what the name says. It’s a machine that simulates an endless amount of rope pulling with various difficulty levels. The one Brian Shaw uses is from Torque and it attaches to a power rack. I, myself, bought a similar endless rope trainer recently and I gotta admit, it’s a very fun workout tool to have.  With a bit of creativity and imagination, you can basically hit every upper body muscle group while working with the endless rope. Brian Shaw’s version is a bit pricey and requires a power rack, but there are less expensive ones on ebay that don’t require a power rack.

4. Tank MX is another Torque product and essentially it is a push&pull power sled with wheels. I am fully aware that this is an oversimplification of what this bad boy really is, but essentinally-yes. This is a pricey sled on wheels. I have never seen or used one myself but I have seen videos of YouTubers using it to either workout or to make some wacky content with it.

From what I’ve read about this and heard other people talk about it on youtube, it works on a similar concept as the endless rope trainer. There are various levels of resistance intergraded in the vehicle and instead of loading up the tank with plates to create resistance you simply flip a lever(or so I assume).

Although, from what I’ve seen, you can also add weight plates on this for extra super hard training time. In the video, Brian mentions that he already has one but that one is in his other gym so he needs another for the one closest to his home.  Which is one of the strongest “weird flex, but ok” moments I’ve ever seen.