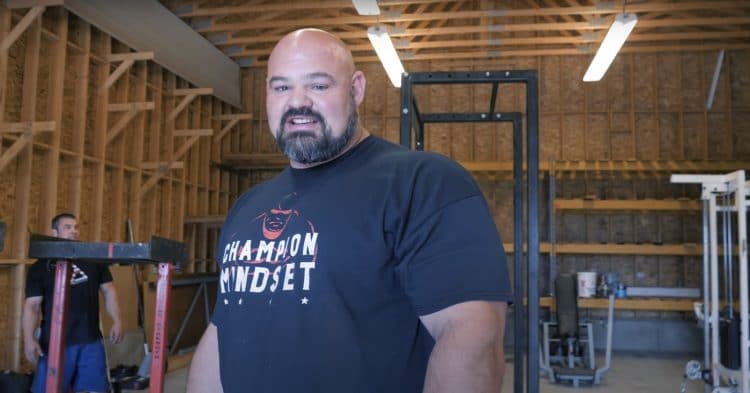 Brian Shaw’s never-ending saga with his new gym(s) has potentially reached an end…at least for the time being. The finishing touches to the long-awaited “Mountain” gym are more or less done and Colossal human that is Brian Shaw is long overdue to have some fun. This can mean only one thing, and that is that he will finally get to break a sweat in with all of the new gym equipment he’s hoarded over the past few months.

Because half of the gym equipment was located in his “temporary” gym/storage and the other half in the famous 500k $ giant gym, Brian Shaw naturally came to the conclusion he needs another gym. So came the birth of the “Mountain gym”, the new monstrosity designed to satisfy  Brian Shaw’s equally monstrous hunger for gainz.

After some brief adjustment and settling in, Brian shows off some of the equipment he hasn’t shown yet. One of them is the custom made squat rack with 100lbs safety guards, which Brian casually picked up and placed on the rack like it was nothing.  Also, we also got the conclusion of what happened to his incline chest press machine for which he was too big to fit in. He got it adjusted and now he fits in perfectly and the machine works like amazingly!

The training session was a typical Strongman workout mixed in with some accessory exercises, like the lat pulldown and the seated row machine. The Strongman part of the workout consisted of log lifting with some lighter weights, sandbag carries and doing some loaded carries with the powerpohl. The powerpohl, despite looking like Satan’s sex toy, is a posterior chain contraption conceived by the powerlifting legend,Chuck Vogelpohl. Brian quickly acknowledges that the contraption is extremely ridiculous-looking but he swears that it works wonders for carrying based Strongman events and basically anything that requires the use of the posterior chain.

Brian’s next contest will likely be the WSM event a bit later this year, then he will host and compete in the inaugural “Shaw Classic” event. The event will feature a 25k cash prize money and will feature 10 elite Strongman athletes including the legendary Big-Z!