Life and accomplishments of Brooke Ence 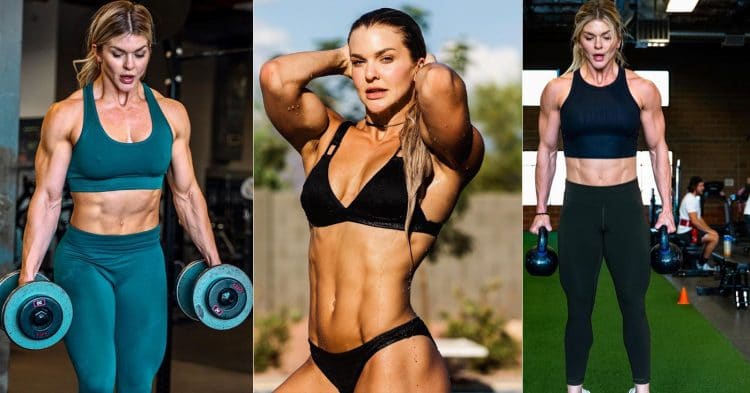 Brooke Holladay Ence is an American CrossFit athlete, fitness model, trainer, and actor. She gained a lot of recognition from her impressive 2015 CrossFit Games debut. This is her complete profile, biography, training regime, diet plan, and more.

Brooke Ence is from California and Utah USA.

She has three older siblings who, like her, were involved in sports during their youth. Ence was involved in gymnastics, softball, swimming, and was a former musical theatre dancer. Ence has said that her dream was to be on Broadway before she got into fitness.

Having participated in many athletic endeavors, she developed the coordination and discipline needed to become a famous, high-level CrossFit athlete.

Before her CrossFit career though, Ence had a short stint as a Physique competitor but she knew it wasn’t for her. In fact, the many failures and roadblocks that she experienced throughout her earlier years were a blessing and she’s even said so.

Because if not for those occurrences, she wouldn’t have found a passion in CrossFit that has allowed her to have the incredible platform that she has today; to reach and inspire millions around the world.

Ence has competed in seven CrossFit Opens, 5 regional competitions, and the 2015 CrossFit Games; the biggest competition in the sport, where she came in 14th place.

But she sure made her one and only CrossFit Games a memorable one. Not only did she win two events (snatch speed ladder, and clean and jerk), but she qualified for the Games after just her second regional competition.

This was the defining moment in her career as her performance did not go unnoticed.

Ence had to stop competing in CrossFit, although not by choice, but because she had a cervical fusion procedure in 2017 due to a compressed spine.

“It was very sad and hard to not compete when I train every day for that.”

But she’s said that it was actually a good thing because it allowed her to work on business and acting endeavors. And while she’s made an incredible recovery and enough to be able to compete again, she doesn’t have the time to train and compete with the goal of making it to the CrossFit Games as she’s explained it’s a full-time job.

Her other endeavors simply take up too much of her time. But she still has a passion for health, fitness, and CrossFit and that will never change.

“I will always be you know in this industry, in health and fitness, and CrossFit and I will compete.”

Brooke Ence uses her Naked Training Program to structure her workouts. Although, she still uses lots of variety in her training.

These are some of her most recent workouts.

Here’s another brutal workout courtesy of the Naked training program.

Rest 2:00 between each round

Check out one of her recent sessions below.

Brooke Ence has an overall very impressive physique but she’s especially acknowledged having some head-turning guns.

“Man, I have always had “big” arms and obviously am pretty used to seeing them and knowing what they look like and feel like inside of every “sleeved” article of clothing that I try on 😂. But I am always surprised by how pumped up I get whenever I hit arms 💪🏼. I LOVE IT 😜, I love it when the dudes in the gym do a double take. Which I can totally see by the way 😁. And aside from the occasional negative chirps I get about my physique, I prefer to assume that they are just a little envious.

Little moments like this remind me just how much I enjoy standing out. I’m not everyone’s flavor and that’s ok with me. I was never meant to be “vanilla” and honestly I’m not even sure if I know what my flavor would be if it had a name 🤔.”

Of course, Ence does not only eat meals from Trifecta and they send her different options but this is an example of what she eats.

She’s admitted to being typecast because of her physique which is to be expected. Although she’s said there have been opportunities that have come her way and she does her best to be prepared for that by taking classes and training her acting muscles.

But acting is by no means something she puts all of her time into as she’s mostly involved with business endeavors and working with companies that give back/charities.

“I’m not going to audition after audition, I take opportunities as they come.”

She has 1.5 million followers on Instagram and 348k subscribers.

She also has an apparel line called Ence Wear.

“I’m an entrepreneur, I love dabbling in all kinds of industries.”

Brooke Ence is more than just an athlete who made waves at her CrossFit games debut in 2015. She’s a successful businesswoman, trainer, and has also seen some success from her acting endeavors.

She’s an inspiration to many and a role model for living a healthier and fitter lifestyle.