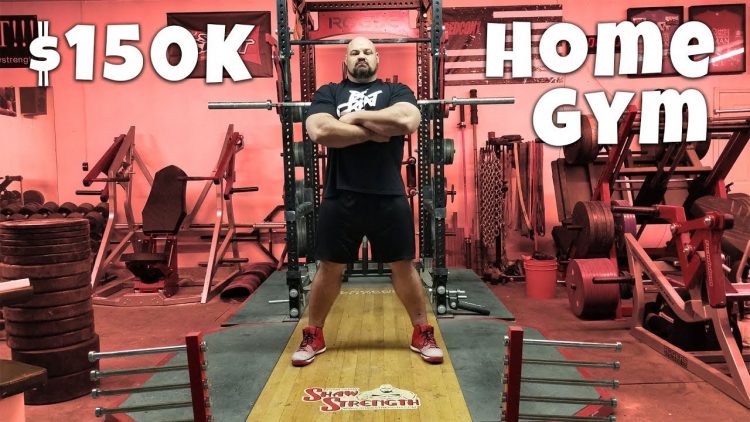 If you are scratching your head on what exactly did Brian manage to spend 150k, you soon get a sense of math once the video starts and right of the bat, Brian explains that he has a 10,000 $ SwissWing recovery/warm-up device. I’m not sure if Brian looks equally hilarious while using the machine as the guy in the picture below, but even if he did I would not have the courage to say it to his face.

After that, we move a few feet away and on to the leg press machine. The version in Brian’s gym allows for single leg work as well as standard double leg pressing motion. This unique twist on the leg press machine allows Brian a lot more exercising options than your standard gym version. Brian points out that his version has a weird angle to it which doesn’t allow you to easily stack up a bunch of plates and pull off a Ronnie Coleman and leg press 2000 lbs. Next, we go to a standard Strongman implement- the Atlas stones.

Brian holds the record for the biggest atlas stone ever lifted at 560lbs, so it’s no wonder he has an entire stack of those stones at home. Moving along, Brian shows off his fancy and pricey “Reverse Glute-Ham Machine“. Brian points out that he saw the machine in a training video from the NFL’s Carolina Panthers. He goes on to say that their main strength coach is a buddy of his and that he bought the machine without ever trying it because the friend, Joe Ken, recommended it to him. After that- we have the Stairmaster. It’s kinda funny imagining the colossal Brian Shaw using a Stairmaster, but he says he bought it for his wife and that he uses it every now and then for the sick calf pump.

Now, Brian goes on to list a lot of equipment and listing it all would get really boring and really repetitive. His gym is so stacked, I would bet that it is better equipped than most commercial gyms. He has squat racks, Thomas Inch dumbbell, kettlebells, slam balls, natural stones, Hammer back rowing machine, bumper plates, Olympic plates, a full rack of dumbbells, barbells, chest press machine-you name it, he’s probably got it.

It’s all there in his basement in the comfort of his home, a luxury many modern Strongmen don’t have. Spending 150,000 dollars on a private gym that’s stacked with expensive and high-end equipment does seem a bit “out there” at first. However, take into consideration that Brian is a 4x World’s Strongest Man winner and a 3x times Arnold Strongman Classic winner all thanks to his ever-growing home gym.

In the video, he mentions that many years ago people would start coming up to him while he was getting set up to do a heavy deadlift or squat session and would just mess up his lifting vibe. Traning in a regular gym just wasn’t going to cut it, if he wanted to be crowned the World’s Strongest Man.