Brian Shaw Eats His Old 15,000 Calorie Strongman Diet, And He Can Barely Handle It! 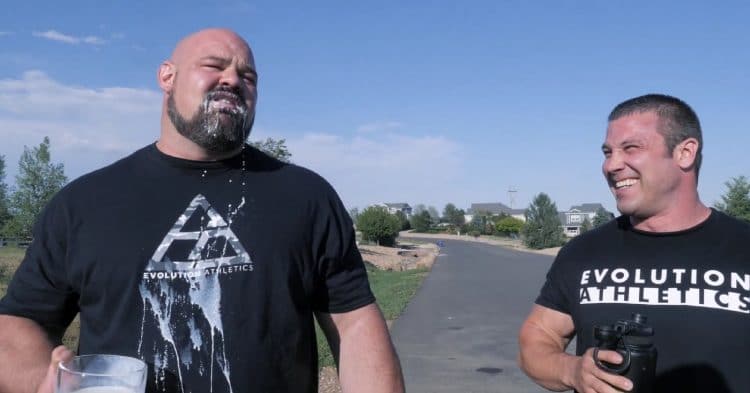 It has been a while since Brian Shaw ate the same way be did while winning the World’s Strongest Man. However he decided to give it a try again recently, and could barely handle it.

In his prime, while winning the World’s Strongest Man four times, Shaw was a massive man. He would weigh upwards of 450lb, and was simply a beast. Although in later years, he has dropped serious amounts of that weight, there was a time where he was one of the biggest men on Earth.

Having lost weight like he has, Brian Shaw has greatly changed his diet. However for old time’s sake, he decided to do a throwback to the way he used to eat, for his YouTube channel. Alongside his friend Tyler, the two decided to challenge themselves by eating his old strongman diet.

From there, Shaw and Tyler began to work on their first of five massive meals. Each meal is typically made up of some sort of protein and carbs combo, with a large drink of either milk or soda to wash it down. They struggle through, constantly talking about how difficult each meal is, and how little room they have left.

These are the meals Brian Shaw ate:

Wow, that is an unbelievable amount of caloric intake! By the end of it, Brian Shaw is glad that he does not have to eat like this anymore. Meanwhile, Tyler, who is already much smaller than Brian and usually eats about 2,000 calories a day, was amazed at the fact that he made it through the day.

Check out the full video below, and enjoy their struggles.