Strongman veteran shows off how his finished house looks like 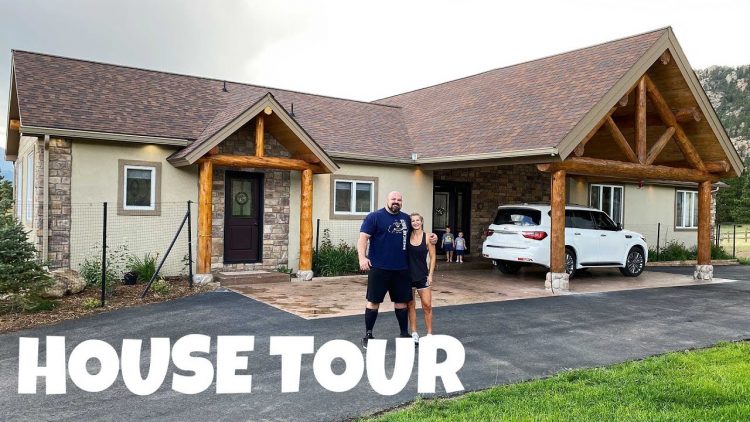 Brian Shaw and his lovely wife have finally moved in into his new giant home.  The gentle giant that is Brian Shaw, has finally finished settling in his new family home and it is massive. There are no other words to describe it, just massive.  The lack of furniture sure didn’t help the visual shock of seeing a gigantic house filled with nothing but air and basic construction material.

The house tour was a typical MTV Cribs-esque tour with the obligatory “this is where the magic happens” line. It has space for guests, shared bedroom for Brian’s two sons that will probably one day dominate the strength sports scene, 2 master bedrooms, giant kitchen, a giant walk-in shower in which (funny enough) Brian doesn’t fit in. It also has one hell of a view on the mountains, Brian’s new gym(not the new 500k $ one, this one is an even newer), and his land.

Speaking of the new gym, I am getting a sense that Brian is a bit of a shopaholic. He drops a video about buying around 20k $ worth of new gym toys at least once a month.  This new-er gym is currently a big empty space that needs some work but it looks like it will be very fun to workout in. Of course, even though the gym doesn’t even yet have heating or cooling installed, Brian already unloaded some gym equipment in it.

However, unlike a typical shopaholic, i would say Brian will make use of most if not all of the equipment. He’s probably thinking long term, Eddie Hall will 100% come over to his gym and hilarity will unfold, other friends and strength athletes or celebs might come over and they do an awesome chest day workout. Also, it should be noted that Brian has already announced that he will be holding a Strongman competition with a 25k $ prize reward this winter at his gym. Which, if it goes well, has enormous future potential. Both Strongman competition-wise and monetary wise. Despite Brian Shaw probably spending close to a million dollars on gym swag/equipment/cool stuff at this point, he will make use of it. He’s a smart businessman and will find a way to monetize that gym.

How to Build a Stronger Grip at Home