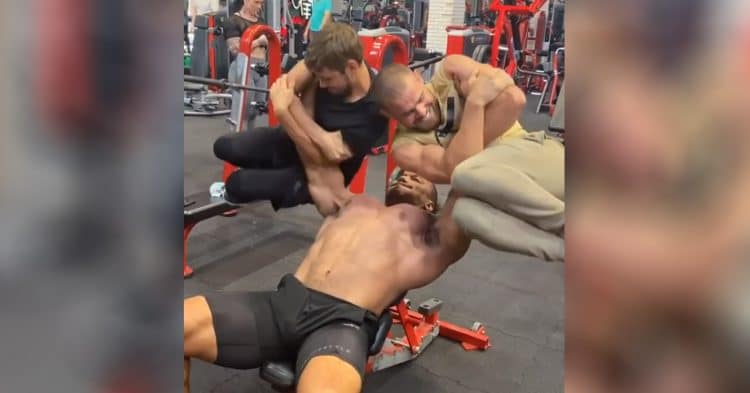 Welcome to another “Larry lifts heavy and/or weird stuff for the ‘gram while making everyone’s lifts look like crap” article. This time it’s the favorite of every relatively or objectively strong Instagram personality, the human press. Bradley Martin usually does stuff like this with a bunch of relatively light(but mega hot and insta famous) girls stacked upon each other, while Eddie Hall in his prime days did this with two of his training buddies.

Since Larry these days has a girlfriend, and the “me too” movement is still doing rounds among famous people, I’m guessing lifting hot girls isn’t an option at the moment. So Larry, naturally just grabbed two guys and started pressing them.  After doing some light digging, it appears the two guys in question are Kazakhstani Russians (of course they are) and they appear to be calisthenics experts who also hit the gym. Also judging by their Instagram, they did some calisthenics shenanigans on Larry.  Guessing Larry will be dropping a video or two with the two and all sorts of wacky stuff will ensue.

After watching this Instagram video several times a single thought kept coming to my mind. That thought was; can a day pass without Larry Wheels posting something on Instagram that’s equally insane and impressive? Is there even a limit to his Insta-creativity? I am leaning towards “no”, there is really no limit to his gym creativity.

Also, I don’t mean to trash talk Larry, but I do have a sort of commentary on this. Doing stuff like this looks really cool and being 100% honest here, If I could incline press two grown men without breaking a sweat I’d probably post it on Instagram as well.  But it also kinda sends the message to the fitness community of “yeah, your informative content is cool and all, but Larry Wheels just shoulder pressed two dudes. If you want me to continue to follow you, I’m gonna need to see you do walking lunges with some local fitness chicks on your back….while on a treadmill“.  Of course, Larry posts tonnes of interesting and informative stuff on his youtube. He even speaks openly about using performance enhancers. He genuinely comes off as a cool guy that just likes to lift stuff and learn how to lift even more stuff. However, things like this are just pure Instagram insanity.