Soccer is by far the most popular sport in the world today, having being played by over 250 million people across the globe. Soccer is one of the most physically demanding sports, so it’s no wonder you can burn plenty of calories playing the sport. 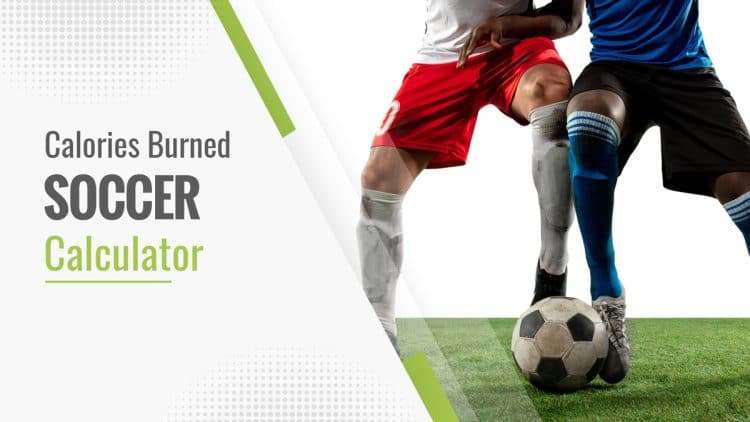 How many calories do you burn playing Soccer?

The average 180lb-person will burn 600-857 calories in 60 minutes playing casual and competitive Soccer.

Since soccer does involve a significant amount of running while playing, it is one of the best sports you can play if you want to burn a lot of calories. The sport of soccer can be played by anyone of any age, as it is a popular sport for young children as well as older adults who play the game for fun.

The number of calories that you will burn from playing soccer depends on a number of factors including your height, weight, time spent playing soccer, and the intensity that you are playing with. Read on to find out how to determine how many calories you’ll burn playing soccer.

Using the soccer calculator to determine how many calories you’ll burn playing soccer is very easy to do. In order to calculate the number of calories that you’ll burn, just input your weight and the time that you’ve spent or plan to spend playing soccer. Then select the intensity that you’re playing soccer and hit “CALCULATE”

Our soccer calculator uses MET (metabolic equivalent of task) values in order to find out the number of calories that playing soccer will burn for you. This value is determined by a convention of 3.5 mL of oxygen per kilogram of each minute while doing the specific activity [1].

The calculator has preset levels corresponding to the intensity that playing soccer gives you. Using this calculator will give you a realistic idea of how many calories you will burn while playing soccer for fun as well as competitively.

Using MET to determine your body’s energy output is what this calculator is primarily used for. A MET value is the number that determines the energy it takes to perform various activities, such as playing soccer at different levels of intensity. The MET value is the ratio that shows the relationship between your active metabolic rate to the resting metabolic rate.

The formula that our soccer calculator uses to determine the number of calories burned per minute is (MET  x  bodyweight in Kg  x  3.5) ÷ 200.

An individual weighing 150 pounds will burn approximately 428 calories from playing general soccer at a casual intensity. This activity has a MET of 7, which means that it burns 7 times as many calories as your resting metabolic rate.

This is what the formula for calculating the calories burned while playing soccer at a casual intensity will look like for a 150-pound individual: 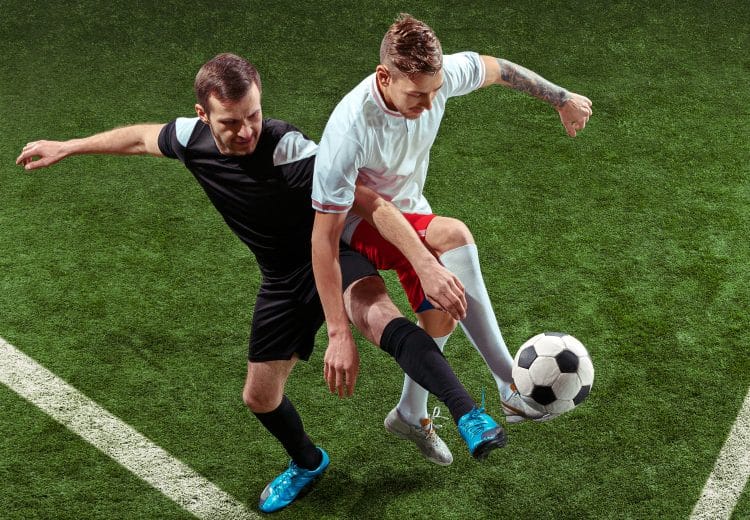 Soccer is a sport played around the world at the most basic level with children all the way up to the professional level and at the Olympic games by men and women representing their countries and competing for an Olympic title.

Each goal that the team score is worth 1 point, and the objective of the game is to outscore your opponent at the end of the match. Each match is 90 minutes long, with a halftime at the 45-minute mark. The game clock will continue to run even when there is a break in play.

There are also typically a few minutes added onto the end of each half to account for the breaks in play and also player injuries that occur.

Since soccer primarily involves short bursts of energy and intense sprinting, the muscles that are worked the most while playing soccer will be your legs.

Specifically worked while playing soccer are your calves, quads, hamstrings, and glutes. Playing soccer and doing sprints strengthens your core muscles as well.

Whether you’re just having a casual kick with friends or playing at the highest level of soccer competition, there are always going to be great health benefits that come with playing soccer.

Again, because soccer involves so much running and physical activity, playing the sport will improve your overall cardiovascular health. Improved cardiovascular health is attributed to lowering your risk for many chronic health conditions like high blood pressure, obesity, and heart disease [4].

Other benefits to playing soccer include participating in teamwork, improving coordination, and the ability to meet new people with common interests.

Included in the 11 players on the field during the match is a goalkeeper, or “goalie”, who defends the goal and tries to prevent the other team from scoring a goal. The goalkeeper is the only player who is legally allowed to touch the ball with their hands, as all other players can only use their feet, legs, head, and chest to play the ball.

When there are illegal plays during the game, such as an illegal slide tackle or playing the ball with your hands, there are different “cards” that are issued by the referee. The corresponding color of the card indicates the severity of the penalty.

The game of soccer can also be very complicated, as there are many different rules that newcomers to the sport may not be aware of. For example, soccer also has “penalty kicks” which result from an illegal play by the defense.

A penalty kick is a free kick that a player has with the intention of scoring on the goalie. The short is taken from the penalty mark on the field and is 12 yards from the goal.

The most prestigious of soccer tournaments is the World Cup, where countries around the world compete against each other in a tournament to get to the championship game and win the “World Cup”.

The top soccer players are also among the highest-paid athletes in the world [3]. Each of the top leagues in European soccer has total wages in excess of $1 billion.

The sport of soccer has a rich history, with many players cementing their legacy as being the best players in the history of the sport. Some of the players below are players who are currently active and still playing soccer, while others are retired or have since passed away.

Among the best players in the history of the sport are:

While the barriers to entry of playing soccer are low, soccer involves constant running across the pitch and can be one of the most physically demanding sports in the world. Each higher level of play brings new tactics and new strategies that players must master in order to succeed in the sport.

How much running is involved with soccer?

Competitive soccer involves a great deal of running, as players need to play offense and defense while running up and down the field. That’s why conditioning is so important if you want to master the game of soccer. Be sure to do plenty of running and conditioning training before you start playing soccer competitively.

Does strength training help me be better at soccer?

Since strength and endurance training will help with your overall cardiovascular system, this will help you to become a better soccer player. Playing soccer also involves physical contact at times, and being able to out-muscle your opponent can be achieved through strength training at the gym.

Playing soccer at a competitive level is one of the most physically demanding sports that you can play, as you can burn a significant amount of calories playing competitively and also at a casual pace.

Soccer remains to be the most popular sport around the world and can be played by children as young as 4 years old all the way up to senior citizens who enjoy the game.

Be sure to check out all of the other calculators that we have to offer to get an idea of how many calories you can burn while doing any activity!

7 Best Back and Biceps Workouts for Strength and Mass