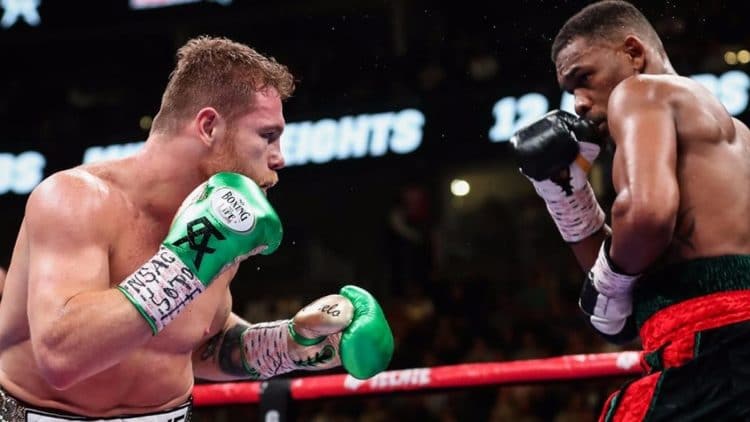 Canelo Alvarez (51-1-2, 35 KOs) got into the ring for the first time in 2019, where he squared off against the IBF champ Daniel Jacobs in a 160-pound unification bout. The match happened inside of T-Mobile Arena in Las Vegas, Nevada, last night (Saturday, May 4). Tony Weeks was the referee.

After signing a five-year, 11-fight deal with streaming service DAZN in October, Alvarez earned a decision win over Gennady Golovkin for the WBA and WBC middleweight titles in their rematch and later destroyed Rocky Fielding with a third-round KO to become the WBA regular super middleweight champion.

Since his loss to Gennady Golovkin in 2017, Daniel Jacobs (35-2, 29 KOs) won three opponents in a row – Luis Arias, Maciej Sulecki and Serhiy Derevianchenko. He fights in Las Vegas for the first time since 2010.

The fighters opened cautiously in the first round. Jacobs landed more clean strikes and won the round. Canelo was busy attacking to the mid-section, but it ended in the opponent’s guard.

Canelo brought more variety to his strikes in the 2nd round. Jacobs also changed levels well and landed few big shots to the head and body. More clean strikes for Alvarez in this round.

Alvarez showed more aggression in round 3, as he pushed Jacobs on the ropes. Daniel countered a few times well in the last minute of the frame. Close round.

We’ve seen more shots from Canelo Alvarez in round 4. Canelo ducked and countered Jacobs’ strikes well, and attacked to the body a lot. Clean round for Mexican superstar.

The fifth round brought major changes in Jacobs’ strategy, as he targeted body more often. Few excellent combos on both sides, great fight.

Jacobs fought wisely in the sixth round and delivered more clean shots. At the end of the frame, Jacobs showed a great movement when he attacked rival’s mid-section off the clinch and pivoted to the side.

Canelo Alvarez attacked in the first seconds of the seventh round. Jacob missed with a big overhand right, and the Mexican moved and delivered body shots well to win this period.

Jacobs switched stance back to orthodox and went for all or nothing in this round. Fighters were trading body shots in the center a lot. Daniel pressed the Mexican on the ropes and landed a few big punches at the end of this frame.

Daniel Jacobs was a better competitor in round nine. He switched to southpaw and confused Alvarez. We’ve seen a big overhand left from Jacobs which nearly rocked Saul!

The tenth round brought a great exchange on both sides. Alvarez even ended on the ropes, eating shots to head and body. Canelo also ate a few big jabs to the forehead at the end of the frame.

Fighters were even in the eleventh round. Few great combos on both sides, Canelo was more defensive, while Jacobs went for all or nothing and pressed his rival hard.

The twelfth round brought a funny scene – Jacobs missed with a left hook and fell on the canvas! This frame brought a wild brawl, as both fighters were unsure of the judges’ scorecards. Many good punches to the head and body.

🗣 @Canelo makes it clear, he will fight ANYONE. #CaneloJacobs pic.twitter.com/YxNqrUSdyh