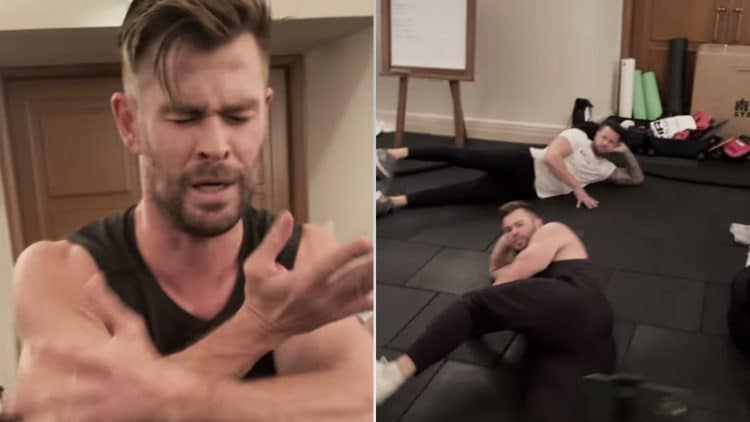 Chris Hemsworth has put himself through some of the most impressive body transformations during his film career. The Australian actor has left no stones unturned to fit perfectly in his roles in numerous memorable films and that also speaks volumes about the kind of efforts that go into making it happen. However, there are certain things even a fitness role model like Chris Hemsworth struggles with!

The 38-year-old actor recently posted a workout video on his Instagram account. The video shows Chris Hemsworth going hard in pilates workout with his brother Liam Hemsworth, guided by one of the coaches on his fitness app Centr. The Hemsworth brothers look quite uncomfortable and struggle to keep up with the workout in the video. The camera even caught Liam Hemsworth resting his hands on his legs to maintain the squatting position. All this while, Chris Hemsworth’s friend and stunt double Boby Holland Hanton kept a safe distance from the brutal session and instead chose to just be a spectator.

“The struggle was real in this brutal Pilates session thanks to @centrfit @liamhemsworth @bobbydazzler84 @zocobodypro @sylviaroberts_pilates,” Chris Hemsworth wrote in the caption.

Pilates workout is typically aimed at building core strength. However, the exercises in Pilates workout also increase joint flexibility and strengthen muscles. Chris Hemsworth’s video highlights the difficulty of doing pilates, even for those who possess an elite level of fitness.

Chris Hemsworth is getting ready for the shooting of Extraction 2

One of Chris Hemsworth’s upcoming movies includes the sequel of the 2020 Netflix action movie Extraction. Hemsworth will reprise the character of the black market mercenary and the shooting is scheduled to start shortly. Four weeks ago, the 38-year-old actor took to social media to give a glimpse at his sculpted physique and massive arms.

“Six weeks out from shooting on Extraction 2 feeling good and ready. Shout out to my team at @centrfit for giving me all the tools I need for a bulletproof rig,” Chris Hemsworth wrote in the caption.

To prepare for the extraction sequel, Chris Hemsworth had shifted from weight training to bodyweight functional training in recent months. Improving agility, strength, and speed has been his primary goal over the last couple of months. The 38-year-old actor even shared his workout with his followers on Instagram and urged them to try it.

Looking at the various updates shared by Chris Hemsworth and the most recent pilates workout video, it seems the Thor actor has done everything in his power to be his best version for the movie. It will be interesting to see how it further enhances Hemsworth’s already electric screen presence.

Australian actor Chris Hemsworth is recognized for having one of the fittest builds in Hollywood today. In a recent Instagram...