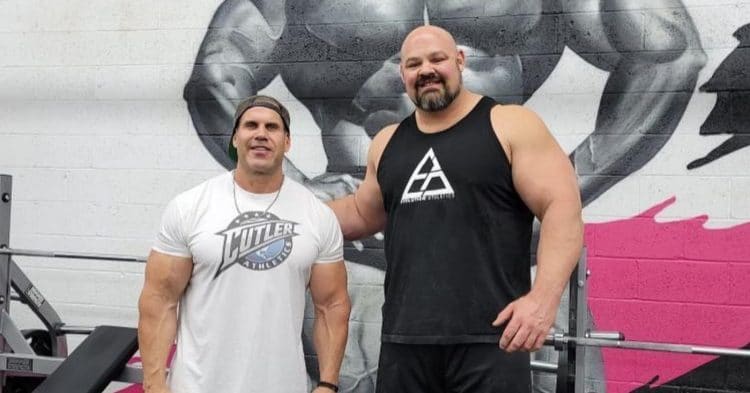 While they compete in different sports, Jay Cutler and Brian Shaw are fan favorites in bodybuilding and strongman, respectively. They recently joined forces for a Q&A where they discuss the differences between their sports.

With four Olympia titles, Cutler is one of the best to ever step on stage as a bodybuilder. Sharing an equal amount of wins in the World’s Strongest Man, Shaw finds himself in a similar spot in his own sport of strongman.

As two of the most popular strength sports athletes to ever live, fans were excited to see these two come together for a Q&A on Brian’s YouTube channel. Here they answered a variety of questions, but the first of which was who would do better in their primes: Brian as a bodybuilder, or Jay as a strongman.

“Man, that’s a tough question,” Cutler said to Shaw. “See, the thing that’s going to be hard, I think it goes both ways, I’m short right, and you’re really tall for bodybuilding. Lou Ferrigno was 6’5, and he had a hard time even competing at 300lb, to really compare. So I think it would be really tough for you to stand on stage. Of course, you carry a ton of size, but to lean down, I mean, you still need to be 350lb or more. With strongman, I mean I think I’d be limited with as short as I am.”

“Being an athlete, I think you would be more athletic than I was, especially with your background. I was great in grammar school and high school, but I never continued after that, so I feel like I lost a lot of my agility, and I think that comes into play so much with strongman. You have to have that ability… I’m just going to say you do better. I’m gonna give you credit, man, because I think you can put on the size, so I think you can be bigger than Lou Ferrigno, probably,” Cutler said.

While bodybuilders, like Jay Cutler, tend to eat a ridiculous amount, we have seen time and again that strongman athletes can put away amounts of calories that don’t seem possible. Brian Shaw has proven that he is no different in this regard, even after eating less and losing weight.

So when someone asked if Jay would be able to eat Brian’s daily diet, one might think that he would have paused a bit. However, with no question he said that he could definitely do this if he was bulking, which was something that Brian agreed with.

“One hundred percent. I heard what you eat. I thought it was a lot more than what I expected. I think we have a lot of similarities, like buying cows and eating how many eggs we eat, and whatnot. Listen, you definitely had a little more higher of a fat diet than I did, but I think our carbohydrates, your protein was a little more, but the body weight, if I weighed as much as you, being over 400, me, I was barely pushing over 300, I think that I would have the metabolism to eat that much,” Cutler said.

“I would be closer to that, than anything that you did in a nutrition aspect, because I ate more than probably 90% of the bodybuilders you read about today, or in the past.”

This was an exciting collaboration between two of the best of their sports. Jay Cutler and Brian Shaw answer a few more interesting questions, so the full video is well worth the watch.