Marvel Avengers star rolls out a new workout on Instagram to show his fans some behind-the-scenes Hulk Hogan prep. 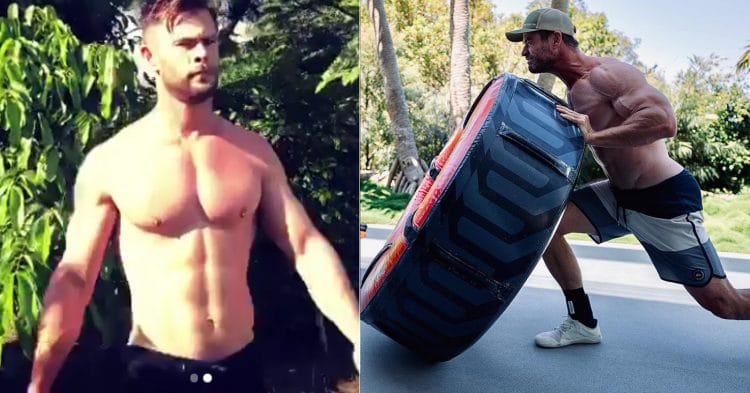 Chris Hemsworth is the actor who plays Thor in the Marvel Avengers film series and is now showing his fans what prepping for Hulk Hogan looks like. Like many other modern-day superheroes, he has a penchant for putting his workouts on Instagram.

This time around, Chris Hemsworth posted a picture of himself rolling a donut in a workout. He notes that the tire is a heavy one. One look at the bulging Thor-sized biceps on Chris Hemsworth indicates that this is not an easy task.

His face tells the story as well. With determination and grit, he rolls the workout tire to its destination, calling it a “cheat day donut.”

If that doesn’t make you feel more guilty about your off days, we don’t know what will.

Even his Avengers co-stars that commented were sounding a little jelly. Chris Pratt, Hemsworth’s co-star in the 2020 Thor film Love and Thunder, noted,

“Just heard from my trainer and he needs you to stop working out because since we’re gonna be in the same movie and everything, he doesn’t want me to stand next to you if you look like that so I’m gonna need you to put on 25lbs real quick cool thanks.”

Pratt plays the role of Peter Quill/Star-Lord in the Avengers films, and will again in the Thor movie Love and Thunder.

Chris Hemsworth may be thinking about putting on a few more pounds with or without Pratt’s encouragement. He will be playing Hulk Hogan in an upcoming Hogan biopic and has said in interviews he will need to be bulked up even more for that film than he was for any Avengers movie.

Read more: Chris Hemsworth Goes From Thor To Hulk By Bulking Up For Hulk Hogan Biopic

It won’t be too difficult for him if he keeps this pace. Working out and bulking up is something he’s fairly good at. Hemsworth owns his own fitness and well-being app called Centr. There he shares meals and workouts that help him to look like the superhero that he is.

With this workout, Hemsworth is well on his way to more “Sexy Man” lists. He’s been ranked #7 on Glamour’s “50 Sexiest Men” in 2013. He also made People’s Sexiest Man Alive cover in 2014, and in 2011 he made Cosmopolitan’s Fun and Fearless Men list.

With a new Thor movie on the way and some Hulk Hogan action as well, Hemsworth is well on track for more fun and fearlessness with his fans.

Bulking Meal Plan To Fill Out Your Sleeves and Turn Heads

Chris Hemsworth and his trainer, Luke Zocchi, are known for sharing their workout routines while prepping the Australian actor's ripped...