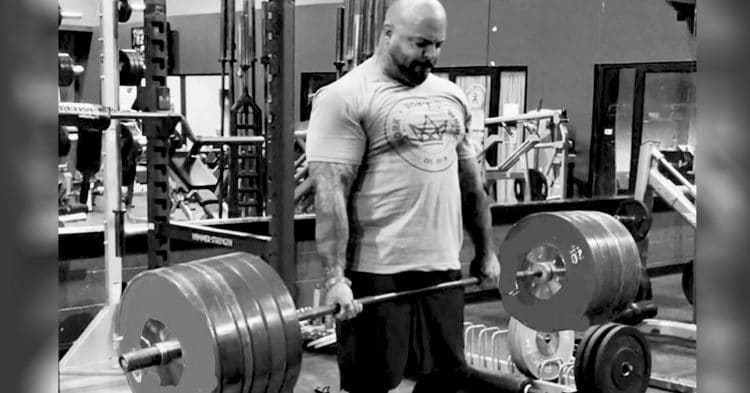 Because there are so many powerlifting training programs to choose from, understanding which type of program is most suitable and effective for you can be challenging.

One of the greatest powerlifting programs around is The Cube Method. This is a high-quality training program created by former powerlifting athlete Brandon Lilly.

The program utilizes a training model known as undulating periodization in order to optimize strength and powerlifting performance.

This article will break down the Cube Method and explain exactly why it is one of the best powerlifting programs in existence.

Who Is Brandon Lilly?

Brandon Lilly is the creator of the Cube Method. In his day, Lilly was a world-class powerlifter. He is well-renowned in powerlifting spheres and was one of the driving forces behind the “raw” movement.

He transitioned into coaching after sustaining a serious injury to his left knee while squatting 750lbs at a powerlifting event back in 2014.

The injury was so serious that he required more than fifteen surgeries to repair the damage.

While Lilly did eventually get back to heavy lifting and had aspirations to compete at the top level once again, unfortunately, complications resulting from the injury forced him to retire from the sport.

Lilly has written a book known as “365 Strong”. This book outlines a number of his methodologies as well as provides a variety of different training programs – including the cube method.

The Formation of the Cube Method

While there are a number of excellent training programs out there, some of them lack specificity and, therefore, perhaps aren’t best suited for powerlifters.

The great thing about the Cube Method is that it is a training program that was specifically designed for powerlifters.

During his time at Westside Barbell, Lilly became a little disillusioned with the use of additional resistance tools such as chains and bands.

Furthermore, he believed that he was training with an overreliance on powerlifting equipment such as compression suits and knee wraps.

Lilly decided that he wanted to return to the roots of powerlifting and simplify his training.

Although there are still features of Westside Barbell programming evident in the Cube Method, the workouts are solely barbell-based.

This section will break down the Cube Method and explain exactly what it is that makes it such an effective powerlifting program.

As with the majority of powerlifting programs, you must first assess your strength capacity.

As the name suggests, a one-rep max test involves lifting as much weight as you possibly can for just one rep and is commonly seen as the gold-standard assessment for strength (1).

Regardless of whether you are an experienced or new powerlifter, you should be performing these tests fairly regularly.

Doing so will not only allow you to track your rate of strength development, your results will also be used in programming.

To ensure you are lifting the correct amount of weight to maximize strength development, most programs, including the Cube Method, will provide you with a percentage of your one-rep max.

The Cube Method is a ten-week training program that requires you to train three days per week with an optional fourth session.

Although this session is not compulsory, Lilly recommends that you train four days a week if possible in order to maximize strength development.

The program can be broken down into three blocks of three weeks each with the final week intended to be a competition. If you are not competing, use this week to retest your strength.

Once you’ve completed the ten weeks, you can then cycle the program again using your new personal bests from the previous training cycle.

Considering that it is a powerlifting program, it should not be a surprise that each workout revolves around the three big lifts – deadlift, squat, and bench.

Every week, a particular focus will be assigned to each of these lifts – heavy, explosive, or repetition. This way, you should never be performing more than one heavy exercise per week.

As you move through the weeks, the focus changes so that by the end of the block you will have completed heavy, explosive, and repetition work for each lift. 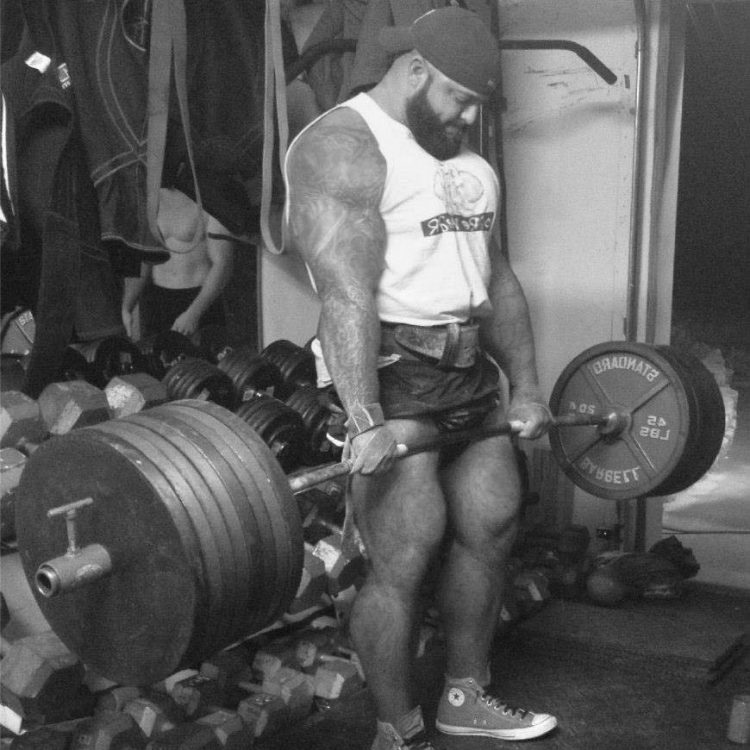 You can find an example of a training block in the table below:

This training structure is then repeated again in the second and third blocks, however, the percentages used will increase.

For the heavy sessions in block one, you are to perform sets of two reps at 80%. However, with blocks two and three, the percentage increases to 85% and 95% respectively.

For the explosive sessions, the percentage begins at 65% in block one and works up to 70 and 75% in blocks two and three.

Finally, the repetition sessions use 70% in block one and then increases to 80 and 85% in blocks two and three.

As well as manipulating percentages, total training volume decreases slightly as you work through the three blocks.

The heavy sessions start with five sets of two reps in block one. In block two, the number of reps stays the same, then there is a reduction in sets, from five to three.

Finally, there are four sets to complete during block three – however, some of these sets are single-rep sets.

In block one, the explosive sessions begin with eight sets of three reps. With blocks two and three, the number of reps is dropped down to two with six sets to be performed in block two and five sets in block three.

While training volume also decreases with the repetition sessions, the number of sets remain unchanged throughout the blocks with two to three sets to be completed.

However, the total number of reps to be performed is manipulated as you work through each block. It begins with eight to twelve reps in block one, decreases to four to eight in block two, and concludes with three to five in block three.

This comprehensive increase in training percentage and manipulation in training volume is done to ensure that a training principle known as progressive overload is applied.

Progressive overload simply involves increasing the demands of the training over time and is the key to efficient strength development (2).

With each training session, you should also perform some accessory work. It is recommended to select three or four exercises and utilize bodybuilding training techniques.

As mentioned, there is an additional fourth session which is intended to be a recovery session.

This additional day gives you an opportunity to focus on your weaknesses. Therefore, the exercises that you choose should target specific areas that require improvement.

You should look to perform three or four exercises and utilize a relatively high rep range – between eight and twenty reps per set.

In addition to these exercises, Lilly also recommends that you perform the military press and leg press. Again, these exercises should be completed using lighter weight and higher reps.

With all accessory work, you must still look to apply progressive overload.

There are a number of ways to do this; the most evident method of doing so is to simply increase the amount of weight lifted over time.

After the three blocks have been completed, the tenth week is intended for competition or for a one-rep max retest.

In order to prepare most optimally for this, in week ten you should perform the following sessions.

This week is a basic deload week. The intention of this week is to significantly reduce training volume in order to allow the body to fully recover and adapt from the previous nine weeks of hard training.

The Principles Of The Cube Method

This section will outline a number of the principles that Brandon Lilly used to create the Cube Method.

One of the most commonly used periodized models is linear periodization. With this model, training intensity gradually increases in a linear fashion.

However, with undulating periodization, the training volume and weights vary on a workout to workout basis.

This constant change of training stimulus does not allow the body to become accustomed to this stimulus and, as a result, significant adaptations in strength can be expected (3).

Undulating periodization is seen in the Cube Method as it involves performing three workouts that all have a specific focus – heavy, explosive, and repetition.

As a result of these focuses, the amount of weight and the volume that you use differs from session to session.

As highlighted, with the Cube Method, Lilly wanted to strip back powerlifting training to the very basics.

Most old-school powerlifting programs involve performing the big lifts once per week, which may help to explain why Lilly has opted for this method.

Due to the nature of undulating periodization, you will train these three lifts using a variety of volumes and intensities.

For this reason, this program may be more suited to intermediate and advanced lifters. Beginners may be better off using a linear periodized program.

The Cube Method has been created specifically for powerlifting athletes. The program is entirely focused on improving your performance with the deadlift, squat, and bench press.

The program focuses on developing different strength qualities such as raw strength, power, and endurance, in order to comprehensively improve your lifting performance.

Furthermore, the accessory work that you do should also facilitate an improvement in lifting performance.

When it comes to your accessory work, you should look to include exercises that are closely related to the deadlift, squat, and bench.

A few examples include the block pull, high-bar back squat, and close-grip bench press.

As touched upon previously, progressive overload is the key to improving strength. The Cube Method does this primarily by increasing training percentages.

At the conclusion of the first block, 5% is added to all primary exercises across the board. Similarly, at the end of block two, the percentages increase once again.

While the training percentages increase, the overall training volume decreases. This is to ensure that the body can cope with the demands of training and to reduce the risk of overtraining.

Considering that you are only to perform the big lifts once per week and that training volume isn’t extreme, fatigue should not build to a significant level.

Furthermore, the additional fourth session is intended to be a recovery session. While these sessions will add to the total training volume, it’s primary purpose is to facilitate recovery.

Lilly does recommend that you avoid reaching the point of absolute muscular failure when performing these lifts. You should always have at least one rep left in reserve.

If you fail a lift, it should be for technique-related reasons and not as a result of muscular fatigue.

Additionally, Lilly also recommends that you autoregulate throughout this training program.

If you find that the prescribed weight is simply too much, you can reduce it. Similarly, if you feel that you can lift heavier than the programmed weight, by all means, add some more.

It should go without saying, if your ultimate goal is to improve your powerlifting performance, you should run a program that revolves around the deadlift, squat, and bench.

The Cube Method is an excellent ten-week undulating training program that comprehensively develops strength in time for competition.