You May Now Kiss The Weights: Couple Deadlifts Together At Their Wedding! 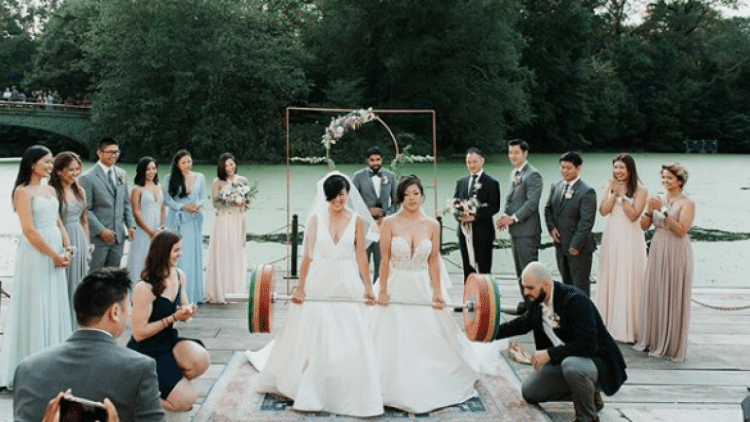 People can have sometimes some pretty unique ideas for their weddings. Dr. Zeena Hernandez and her new wife Lisa Yang added to that idea by doing some deadlifts in their ceremony.

Hernandez and Yang are a young couple, madly in love. At 27, and 28 respectively, the pair have been together for five years, meeting in New York. One of the big things that drew them together was their mutual love for fitness.

That is why, when they got married, they decided to add a fitness touch to their ceremony. After they exchanged their vows at a dock in Prospect Park, Hernandez and Yang did a minor costume change. Removing their dress shoes, and replacing them for sneakers, they stepped onto an oriental rug. Before them, they were presented a barbell, loaded with 253lb. Subsequently the two would lock up mixed grips, and do a set of three tandem deadlifts.

Check out this unbelievable picture from their wedding:

This was quite the scene for a wedding, definitely not what one typically sees. However, if you know anything about Zeena Hernandez or Lisa Yang, this is actually in line. Dr. Hernandez says that the two started out running before she introduced Lisa to CrossFit. Then it was Yang who started to find an interest in weightlifting, involving her partner as well.

Following doing these deadlifts, the two got back on the altar and exchanged rings. They were glad that all the planning that went into that stunt paid off. Furthermore, they love what the joint deadlift meant for their relationship. Speaking after the wedding, Hernandez explained why they chose to do the lifts.

It is incredibly heartwarming to see a relationship built around fitness. It is no secret that working out can lead to a lot of positive benefits. Nevertheless, for Zeena Hernandez and Julia Yang, it brought them a ton of happiness.

The Life And Legacy Of Larry Scott