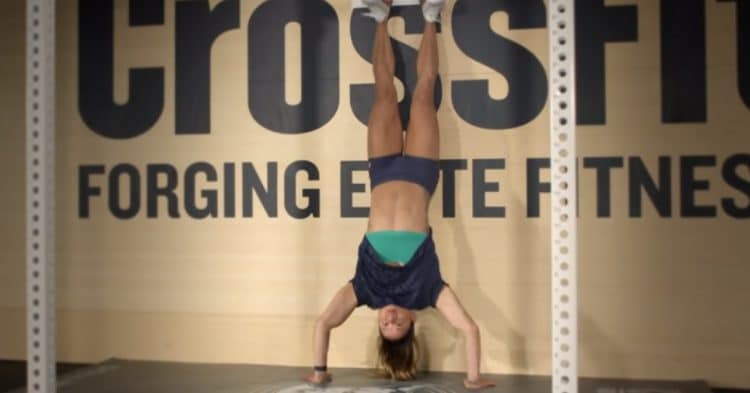 The deficit handstand push-up standard that was used in the 2018 and this year’s 20.3 Open received plenty of criticism because it wasn’t realistic for all athletes. The movement itself involves doing a handstand push-up against a wall and athletes’ feet have to reach above the marked line for a complete rep.  Well, the standard apparently wasn’t/isn’t completely accurate for everyone due to body type differences between athletes, as a result of the measurement requirements determined beforehand.

Forearm length is taken into consideration in relation to the upper arm which may not be a fair method obviously. So there’s some controversy about this particular movement which is to be expected.

Well, on Thursday, CrossFit brought back an old handstand push-up standard for the 2020 CrossFit Games Age Group Online Qualifier (AGOQ), which was a 17.4 event from the same qualifier in 2017.

It’ll involve a more equal measurement standard which hopefully allows athletes to perform the movement without having to modify body position to maximize performance.

In 2018, CrossFit athlete Jacob Heppner wasn’t pleased with the standard used in 2018 and 2019 as he had to perform the movement on his knuckles for his feet to reach the line. His forearms are long compared to his upper limb and that’s where the issue lied for him. You can read his concerns below which he posted on Instagram…

So far, we don’t know if this will be the standard moving forward but hopefully, it all gets figured out to level so everyone has a fair chance.

Best TRX Back Exercises For a Thick Rock-Solid Back