CrossFit Open Workout 20.2 To Be Announced Live From Australia

Matt McLeod versus Khan Porter will be the main event 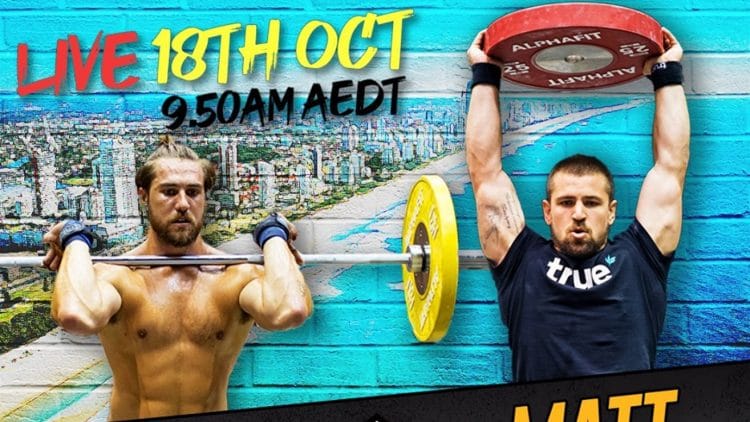 Business is picking up in CrossFit. The Australian CrossFit Championship made news this week about their next event.

The CrossFit Open Workout 20.2 will be announced live by the Australian CrossFit Championship on Friday, October 18 at 10:50 am AEDT. In the United States, it’s Thursday, October 17, 7:50 pm Eastern Time.

At 26 years of age, McLeod is an Australian native. In 2019, McLeod placed fifth for Australia.

First appearing in Crossfit in 2013, Porter is now a veteran of the circuit. Hailing from New South Wales, Porter placed in the top four from 2015-2018. Earlier in 2019, Porter placed seventh for Australia.

“TUNE IN on Friday 18th October at 10:50am AEDT to watch this showdown for Open announcement 20.2 between 2 all star Aussie Crossfit® legends, @mattmcleodd and @iamkhanporter.

We’ll be streaming the event LIVE and exclusive on our Facebook page, so tag in the mates you know will want to watch.
Who will you be cheering for? Ladies and gentlemen, brace for pace when these mean machines take to the floor.”

The ACC is going to be huge.

The announcement for the CrossFit Open Workout 20.2 is set to stream live and direct on the Australian CrossFit Championship’s Facebook page.

The 2020 Open officially kicks off on October 10. In addition, The Rogue Invitational, the French Throwdown, and the Brazil CrossFit Championship will stream the live announcement.

After that, the 20.1 announcements will see Rich Froning and Scott Panchik squaring off live from Austin, Texas.

Registration for the 2020 Reebok CrossFit Games Open is still live. Each year of the Open is filled with classic moments. Stories of first muscle-ups and personal breakthroughs are often sparked during the five weeks of competition in the Open.

2020 is starting off on a bit of a negative note, as bush fires ravage the Australian wildlife. CrossFit athletes...

It has been a crazy week in CrossFit action. At the end of it all, four individuals and two teams getting...

The 2020 CrossFit Open started earlier in the month and the leader boards are already filling up. To master CrossFit Open Workout 20.4,...