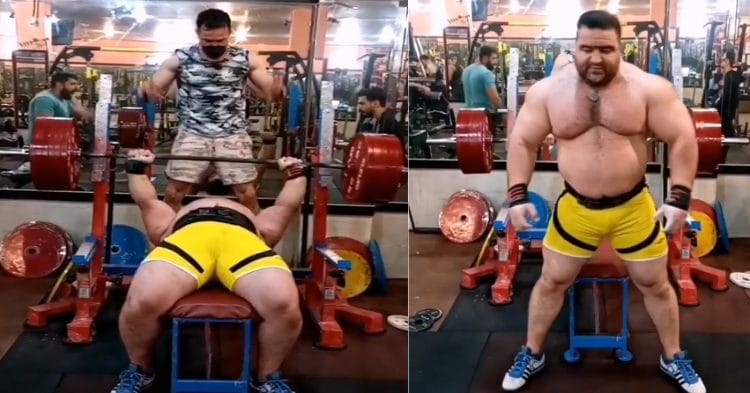 Julius Maddox, you better start warming up on the bench press because the Iranian monstrosity Danial Zamani is coming for your record.

For the past two years, the lifting community was in awe of Julius Maddox smashing bench press record after bench press record with ease.  However, once he became the King of the bench press he automatically put a huge target on his back. Now, the contenders are arriving and aiming to take down Julius’ near-mythical bench press record of 355kg(raw). This brings us to the man we will be talking about today,  Iran’s Danial Zamani.

Since he mostly competes in local powerlifting meets, he isn’t all that known to the wider public. However, his Instagram gives some insight into his competing history. According to the accolades on his page, has been competing since 2014 in both equipped and raw categories in the 140kg and +140 kg weight classes. His best competition bench press results are 215kg(raw) and 345kg(equipped). This sounds impressive as hell, but not nearly enough to be mentioned in the same sentence as Julius Maddox who benched 355kg raw.

However, those stats from Zamani are from a few years ago and it judging by an Instagram, video he posted few hours a ago- he has drastically increased his raw bench.

The video description basically says that he is thankful to God for allowing him this feat of strength and after that he thanks his crew for spotting him and training him. Since my Persian is about as good as Eddie Hall is at being hydrated I tried google translating the video description and that is never a good option. However, here’s what he had to say;

“…325kg raw. Thank you, God. O Allah I am just looking for the world record to hit the record. It is only important to hit the record that is this weight is set for the world’s record, the highest record of the chest press of Iran and Asia, and the second person I am currently playing with this weight in the world, and hopefully I will attack in two weeks weight 330kg…” ( later on in the post he says thanks to his lifting crew and friend and fellow countryman, Strongman Peiman Maheripour who is currently destroying near world record deadlift numbers. )

From what I am gathering, he is currently going for the Iranian and Asian bench press record of 330kg, which he should be getting a chance to set in two weeks’ time in a powerlifting meet. His current personal best is, according to him that would be the second biggest bench press in the world(Julius 355kg being #1) and of course, he is aiming to get that world record once he beats the Asian record.

It is also worth mentioning that Danial is progressing FAST. The video you see above is from late January, where he benched 305kg(also raw), and as you can see, it gave him a real fight. Now fast forward some 9ish weeks later and he has added nearly 20kg to his bench and does it with a casual bottom pause with plenty of room for more reps, that’s scary fast progress.