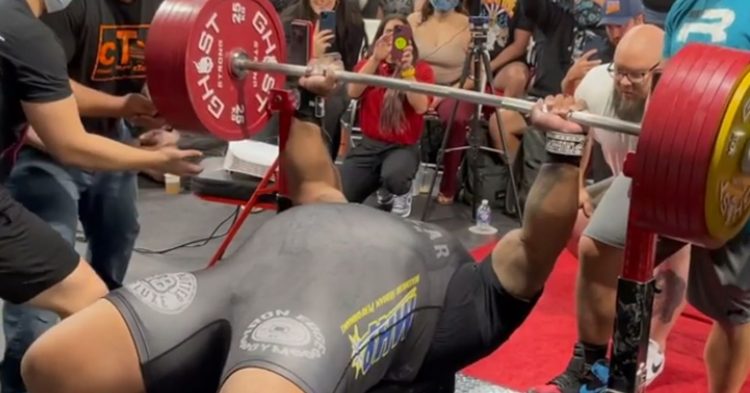 It’s an incredible time to be alive right now with so many all-time world records being broken in strength sports. Most recently, American powerlifter Julius Maddox broke his previous all-time bench press world record, completing a 355kg/782.6 lbs lift at the Hybrid Showdown meet in Miami, Fl on Sunday.

Maddox weighed in at 447lbs/203kg for the event that is sanctioned by the World Raw Powerlifting Federation (WRPF) and was also live-streamed to the Hybrid Performance Twitch channel.

He opened with a 727lb/330kg lift that was a success and then he decided to go for it which was a sight to see; history was made once again, on February 21, 2021. The big man made it look like a piece of cake!

Watch the mind-blowing lift below that was posted to King of The Lifts Instagram page.

Fast forward to earlier this month and he beat all other records in training by landing a 771lb/350kg bench press.

The Kentucky native attempted an 800lb/363kg bench press in June but failed the lift and incurred injuries after a misload of the bar.

But he picked himself right back up and has been training like a world record bench press athlete. That 800 lb bench press he’s eyeing will be the new standard in no time if he keeps on like this.

And that may be very close as Maddox could be attempting the massive feat in just a couple of months. But we will be sure to keep you posted so that you don’t miss a lift!