No Result
View All Result
Legs and Glutes
Fact Checked
Fact Checked
This article was written by one of our qualified writers, and fact-checked by our experts. The numbers in parentheses (e.g. 1, 2, 3, etc.) throughout the article, are reference links to peer-reviewed studies.
Our team of experts include a board-certified physician, nutritionists, dietitians, certified personal trainers, strength training experts, and exercise specialists.
Read Our Editorial Process

If you want bigger calves then you must utilize the best exercises for the job. The donkey calf is included in that conversation and has long been a staple for improving lower leg development. In this guide, we've explained how to do it with tips, variations, and how to include it in your workout regime. 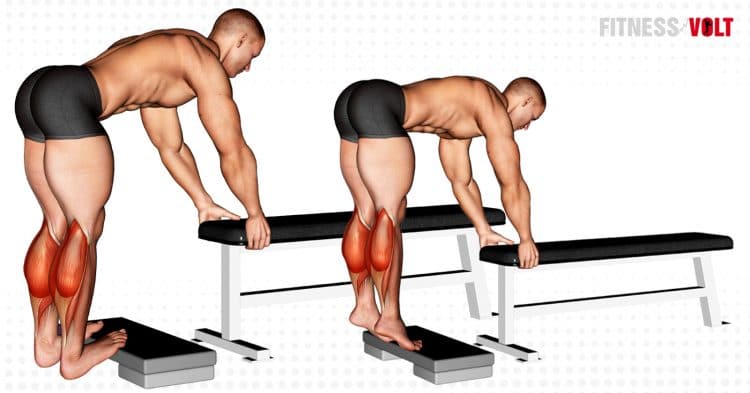 Don’t worry, no donkeys are harmed (or involved) during this exercise. The name comes from the setup and performance of this movement that was made popular by old-school legends like Arnold Schwarzenegger who’d have one, and many times multiple people sit on his back while he did calf raises.

But we’ve come so far since the Golden-Era of bodybuilding and there are actually several variations of the donkey calf raise (we’ll get to that shortly) available today including machines made specifically for it (ooh… fancy).

Anyhow, calves are one of the most neglected muscles but that doesn’t mean you should forget about them too. While these lower leg muscles might be stubborn, they can be improved and are very important especially if you’re an athlete. The real advantage of the donkey calf raise is that it provides a pronounced stretch on the muscles and this is a key component of development.

In this guide, we’ve explained how to do the donkey calf raise with tips, variations, and information on the best way to include it in your calf workouts.

Here’s a guide to the donkey calf raise…

The donkey calf raise is a calf muscle exercise although, depending on the variation and amount of weight used, the core muscles are also engaged. But primarily, we do it to build diamond-shaped calves.

The gastrocnemius is the most superficial of the calf muscles that forms the bulge on the upper part of the lower leg. It also has two heads; medial and lateral. The gastrocnemius crosses the knee and ankle joint and therefore functions at both ends, although it plantarflexes the foot (points the toes down) when the knee is straight.

It also contains more fast-twitch fibers than the soleus which is better for fast and explosive movements such as sprinting and jumping.

The soleus is the other calf muscle that’s large, flat, and deep to the gastrocnemius. It only crosses the ankle joint and functions to plantarflex the foot when the knee is bent. The soleus and gastrocnemius have different attachment points but merge together at the Achilles tendon and attach at the back of the heel.

The soleus is also an important postural muscle and has more slow-twitch fibers that are better suited toward endurance-type activities.

The core muscles include the rectus abdominis (abdominals), transverse abdominis (deep core muscles), and obliques (internal and external). These muscles are responsible for the movement and function of the trunk such as rotation, flexion, extension, stabilization, etc.

How To Do The Donkey Calf Raise

Alright, so you learned what muscles are worked during the donkey calf raise and now it’s time to do it. Because there are so many different variations, we’ve provided instructions for what we believe to be the most common.

We mentioned variations and we’re going to give them to you. Nowadays there are various options thanks to the progression of knowledge over the last several decades but also because of the machines that make it possible.

Here are four variations of the donkey calf raise that we recommend.

Some gyms have a dedicated donkey calf raise machine while most probably don’t, especially the non-commercial gyms. But if you do have access to one then consider yourself lucky because it’s designed specifically for this awesome movement.

The smith machine is another piece of equipment that you can use to add weight to this exercise. Typically, weight plates are used to elevate your toes and ensure a full range of motion. In addition, a bench or something is placed in front so that you can lean on it for support.

Alright, so you may look crazy but if you’re one of those crazy people who just don’t give a crap what others think, then have your partner jump on your back and start pumping out reps.

The leg press calf raise places you at a similar angle as the donkey calf raise and therefore could be considered a variation. You have to place your toes on the bottom edge of the platform so that your heels are hanging off to ensure you’re getting a decent range of motion.

We don’t recommend going too heavy with these though because of how the leg press is designed.

How To Include The Donkey Calf Raise Into Your Training Routine

The best way to include the donkey calf raise in your training is to do it alongside your other calf exercises. Because after all, it is a calf exercise.

If done using completely straight legs, the donkey calf raise emphasizes the gastrocnemius. Therefore, if you were going to choose one other calf exercise to do, it should be done with bent knees such as the seated machine calf raise to target the soleus.

Although, there really aren’t a ton of variations as far as calf exercises go. So you’ll either do a standing or seated variation. But every workout that you train calves, include both a standing and seated calf exercise.

We recommend 2-4 sets of 15-20 reps for the donkey calf raise using heavier poundages. The calves can be a very stubborn muscle and sometimes they need a lot of reps with heavy weight to force a growth response.

The donkey calf raise is a great exercise to add to your calf training arsenal. It may not be appropriate to do it the traditional way anymore (unless you just don’t care) but as you saw today, there are other effective variations of that you can do instead.

Shaun Clarida is working hard to maintain the size and density in his legs six weeks out of the 2022 Mr....

Friends don’t let friends skip leg day, or at least that’s what the memes say. And while many lifters spend...